We have a three-way tie for the EPL Golden Boot: Arsenal’s Pierre-Emerick Aubameyang, Liverpool’s Mo Salah and Sadio Mane all lead the Premier League with 22 goals. Unlike the World Cup, there is no Golden Boot tiebreaker in the EPL, per Football.London.

This means Aubameyang, Salah and Mane will all share the Golden Boot. Each player will receive a trophy just as they would if they had won the award outright.

Heading into the final day of play, Salah had a two-goal lead, but Aubameyang scored two second-half goals within 11 minutes of each other to tie Salah. Sane, Salah’s Liverpool teammate, also scored two goals against the Wolves to make for a three-way tie.

Sane’s goal in the 81′ paired with his earlier goal at the 17′ mark led to an exciting finish to the Golden Boot race. Liverpool came up one point short of the EPL title, but both strikers will receive a Golden Boot trophy.

For Salah, it is the second straight year he has won the award. Salah emphasized the meaning of team accomplishments over individual awards when he won in 2018.

“This one is very special to be honest, the golden boot,” Salah told Sky Sports in 2018. “But as I have said before many times, it’s always on my mind to help the team win games. So now we’re in the Champions League next year and I’ve won the award, so I’m very proud. I’m always trying to improve, I’m improving year after year. It’s very special to break the record here [at Anfield]. I will do my best to win it next season!”

Aubameyang had a late chance in extra time to become the outright winner, but the ball sailed over the goal. This led to a shared Golden Boot title for Aubameyang, Salah and Mane.

Lovely to see Auba with the golden boot ?? pic.twitter.com/omcgX9Yhuw

“We were progressing, we were being consistent,” Emery said, per London.Football. “We can be not 100% happy but the players worked all season to progress. We finished a big distance to City and Liverpool but closer to Tottenham and Chelsea. Aubameyang is our scorer. Lacazette too, Nketiah has the possibility to grow up and improve with us.”

Here is a look at Mane and Salah sharing the Golden Boot trophy after their final match. 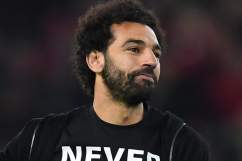