Omaha Beach has been scratched for Saturday’s race making Game Winner the new favorite. Bob Baffert is essentially the favorite with all three of the top horses in the Derby with Omaha Beach unable to run.

The horse was the top contender at 4 to 1, while Game Winner was next in line at 5 to 1. Game Winner is now the 4 to 1 favorite after the scratch. Yahoo Sports Pat Forde detailed why the horse was scratched.

Omaha Beach reportedly was coughing Wednesday morning, and an examination revealed an entrapped epiglottis — a breathing obstruction that compromises a horse’s ability to breathe during exercise.

Bodexpress is the biggest beneficiary as he takes Omaha Beach’s spot in the field. According to Yahoo Sports, Bodexpress will start at the No. 20 post while the other horses shift down given Omaha Beach was in the No. 12 post.

The Omaha Beach defection makes room for supplemental entry Bodexpress, who was on the outside looking in. He will move into post position 20 and the rest of the field will move down to make up for the opening in post 12, which had been Omaha Beach’s starting position.

The Big Question Is What Happens to Jockey Mike Smith

Jockey Mike Smith made headlines by his decision to ride Omaha Beach over Baffert’s three horses. Smith liked Omaha Beach’s chances to win on Saturday, but now the jockey is without a saddle with less than three days to go before the race. Some speculated Smith would go back to Roadster who he had ridden before Churchill Downs, but Baffert noted to Yahoo Sports he is sticking with his jockey.

“I’m all in with Flo,” Baffert told Yahoo Sports. “I feel horrible for Richard and Mike.”

Baffert has been talking up the new favorite leading up to Churchill Downs.

“Game Winner is a fighter,” Baffert said after the Santa Anita Derby, per Courier-Journal. “I think Game Winner’s next race will be better. I’ve been bringing him along really easy.”

Prior to the news, Baffert praised Omaha Beach as the favorite.

“[Omaha Beach] is a really good horse,” Baffert noted to Kentucky.com. “He must be, since Mike Smith went ahead and took him. So he feels pretty good about that. I have a really good relationship with Mike Smith, and we talked a long time. I told him, ‘If you want to ride that horse, then go ride him.’ … He wanted to make sure I wasn’t upset about it. And I told him, ‘No, you won’t have a problem with me, but you might have a problem with my wife, Jill.’

Here is a look at the updated Kentucky Derby odds at Westgate, per ESPN’s Marco D’Angelo. The number in front of each horse is their post position. 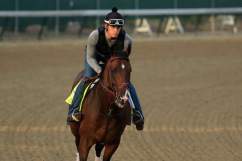