Getty Stephen Curry #30 of the Golden State Warriors reacts after defeating the Portland Trail Blazers 116-94 in game one of the NBA Western Conference Finals.

The NBA finals start on Thursday, May 30 at 9 p.m. Eastern on ABC, per Sports Media Watch. Game 1 will take place in either Toronto or Milwaukee depending on who wins the Eastern Conference Finals. The Warriors have already punched their ticket to a fifth straight finals appearance and are awaiting their opponent.

Golden State will have a little more than a week to rest which is great news for a team with a number of key players battling injuries. Kevin Durant, DeMarcus Cousins and Andre Iguodala all missed time against the Blazers. After Golden State swept Portland, the team admitted that there was a bit of extra motivation to get some added rest to get healthy.

“The NBA Finals have an experience with it,” Klay Thompson explained to the USA Today. “It is such an emotional roller coaster. It is nice to get away from the game a little bit before it starts, because emotions run high and it takes a lot out of you.”

Here is a look at the 2019 NBA finals schedule.

Here is a look at the projected NBA finals schedule, per Sports Media Watch.

Kevin Durant Is Expected Back for the NBA finals

Durant missed the end of the Warriors-Rockets series and the entire Western Conference Finals. Golden State never issued an exact timeline for Durant’s return, but owner Joe Lacob told The Athletic that KD will be back for the finals.

“I don’t know if you forgot so quickly how in the first round, and the second round, and how everyone was saying Kevin was the greatest player in the world and he was dominant,” Lacob noted to The Athletic. “So he was incredibly important. Unfortunately, he got injured. He’s coming back now for the Finals, and so the story’s not fully written yet.”

Golden State will be the favorites to complete their three-peat over the Bucks or Raptors. Either matchup features the Warriors against an all-star in Kawhi Leonard or Giannis Antetokounmpo. For the Warriors, it will be interesting to see if they continue to ride with the lineup that swept Portland, or if Durant and Cousins are indeed headed back to the court.

The Bucks or Raptors will have home court advantage in the finals. This provides an added wrinkle to the title series as it gives the Eastern Conference team a better chance to split the first two games. However, the Warriors will be the more rested team with the Bucks-Raptors series going at least six games. 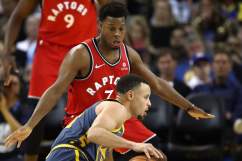 NBA Finals 2019: Who Will Have Home Court Advantage?