Rafael Nadal is engaged to long-time girlfriend Maria “Xisca” Perello, per CNN. The couple became engaged during a vacation in Rome back in May of 2018, but it remained private until news broke in 2019.

The link will be in June and various menus will be offered, prepared by chef Mikel Acosta. The wedding will be held in an abbey in the north of Mallorca and with about 600 guests, as the couple wants to keep all the privacy possible.

Hola reported that Nadal and Perello are eying a date later in the fall. As for Nadal, the tennis star admitted he is “annoyed” that their engagement news went public.

According to W Magazine, Perello works in the insurance industry in addition to her role with the Rafa Nadal Foundation as the Director of Strategy and Relations With Institutions. Nadal started the foundation in 2008 with his mother to help empower young people. Here is a look at the foundation’s mission and vision detailed on its website.

Vision
In the Rafa Nadal Foundation we strongly believe in the transformative power of sport and education, two tools that allow children and teenagers to go as far as they can, regardless of their background or personal and social conditions, even for those who have learning difficulties or disability.

Mission
Our mission is based upon the belief that every child and youth should have access to equal opportunities now and in the future. Through our projects in Spain and India, we work alongside with them to make the most of their abilities, empowering them and fostering values such as self-improvement, respect and effort.

Nadal’s Girlfriend Prefers to Stay Out of the Spotlight

Perello used to avoid attending Nadal’s matches but has now become a regular at cheering on her future husband at the marquee tournaments. During a 2011 interview with the Telegraph, Perello detailed why she prefers privacy over being in the public eye.

“Even if my family asks me about Rafael,” Perello noted to the Telegraph. “I prefer not to say much. The fact is that I just don’t feel comfortable talking about these things, even in private. It’s what works for me, and what works for Rafael and me as a couple. We wouldn’t have it any other way.”

It will be interesting to see if the couple gets married sooner rather than later this year. A June wedding would mean the couple would tie the knot before Wimbledon. 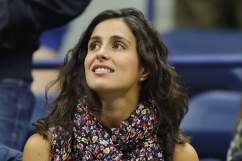