Zion Williamson does not have a son, but his little brother, Noah Anderson, stole the show at the NBA draft. Some fans were confusing Anderson for his son, but it is actually Williamson’s step-brother. Anderson was sitting with Williamson’s parents at his table in the green room and was wearing an adorable suit with a bowtie.

Williamson spoke about his close relationship with his little brother in a Ball Is Life documentary that was released when the No. 1 pick was in high school.

“Noah is my little brother and I always look out for him,” Williamson explained in the documentary. “[We] go outside on that little goal I have and play basketball with each other. I’m always chillin’ with Noah. Noah has this cool vibe to him. When you are around Noah, how can you not smile and laugh? Noah has that swag about him, I love it because I say, ‘Yeah, that’s my little brother. What’s up, bruh.'”

Williamson’s Little Brother Was Part of a 2017 Viral Video

Zion Williamson's AAU coach on the sidelines with his son asleep AF in his arms. Loudest gym in America this kid is LIGHTS OUT pic.twitter.com/oo6xraQ2Zv

It is not the first time Anderson has stolen the show. Williamson’s brother was part of a 2017 viral video after falling asleep on his father’s shoulder during an AAU game. USA Today described the moment that went viral.

Noah is Zion Williamson’s 3-year-old half-brother. Noah managed to sleep through all the hoopla in the arms of dad Lee Anderson, who was coaching SC Supreme at the time.

Noah’s ability to snooze despite the noise and overflow crowd did not go unnoticed on social media.

As for the draft, Williamson was emotional after being selected by the Pelicans with the No. 1 pick. During his interview with ESPN’s Maria Taylor, Williamson was in tears as he cited his mother’s sacrifices as the reason he has had so much success. After Williamson sustained a serious injury at Duke, he spoke about how his mother helped him through the adversity.

“I was sitting there, on the training table,” Zion explained to North State Journal. “The game was on. My mom walks in, and I broke down. I’d been thinking about that game for so long. … I just cried in her arms. She told me that everything happens for a reason. She told me I’d be back.”

Zion Williamson Is 13 Years Older Than His Brother, Noah Anderson

According to ESPN, there is a 13-year age difference between Williamson and his younger brother. ESPN detailed why Williamson and RJ Barrett being called brothers is significant.

That’s the way most people we spoke to have described this team and Williamson and Barrett. Brothers. It means something.

Williamson has a younger brother, Noah Anderson, who is 13 years his junior. Williamson dotes on the kid, like a proud papa. The age gap matters. 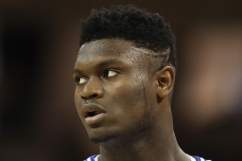