The Dallas Cowboys have been cleaning up on NFL Network’s Top 100 players of 2019 with eight total picks and just four revealed by the end of the “70-61” edition. Cornerback Byron Jones was the first one off the list at 97th, followed by linebacker Leighton Vander Esch at 74th.

Next on the list is wide receiver Amari Cooper at 64th and middle linebacker Jaylon Smith at 61st.

Amari Cooper had six touchdowns in nine total games with the Cowboys after being traded away by the Oakland Raiders. Cooper immediately took over as the go-to guy for quarterback Dak Prescott in the home stretch of the season. He made big catches in the playoffs and against divisional opponents.

The Raiders lost out on a sure thing and Cooper’s name on the NFL Top 100 players list proves just how much the league respects him. His speed and ability to stretch the field is a tremendous need for the Cowboys. He can take a hitch route and take it to the house with ease.

The 34th pick in the 2016 NFL Draft had a turbulent rookie year in 2017 with 81 total tackles but overcame it with an inspiring season in 2018 where he exploded for 121 total tackles and four sacks. 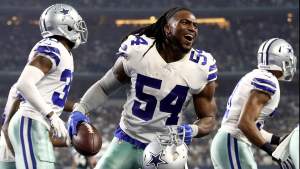 Smith is entering his third season in the NFL as a Cowboy and will look to build on his performance this season.

He’s still developing and won’t have all the pressure on him as the Cowboys’ linebacking group is perhaps the best in the league. Yet, he will still have a large impact on this defensive unit that could rank top 10 in the league this season.

According to NFL.com, Smith was one of only five players with 120+ tackles and 4.0+ sacks. He totaled 14 hustle stops (20+ yards covered before tackle).

Cooper is reportedly in no rush to get his extension done. He’s letting the market settle itself out with the contracts of Atlanta Falcons’ Julio Jones, New Orleans Saints’ Michael Thomas, and Kansas City Chiefs’ Tyreek Hill.

But more importantly, he reported to camp in Oxnard, CA without any drama.

The Cowboys are also dealing with looming contract negotiations with Prescott and running back Ezekiel Elliott. Once one of these players signs a deal, the rest of the dominos should fall as the team sees how much the first deal cost them. Those three players are crucial to the Cowboys’ success this season, however, if it’s too costly they might not be able to retain all three of them.

NFL Network premieres a new episode each day for the next six days with 10 players at a time. Tomorrow’s episode will feature Top 100 players, 60-51 and starts at 9 p.m. ET.