Twitter/@JayUnoJones Jay Jones is one of the new players on "Last Chance U."

Jay Jones is one of the new stars of “Last Chance U,” and fans are curious to know where the former Georgia Tech quarterback is headed. Please be advised there are spoilers ahead regarding Jones and “Last Chance U” just in case you have not finished Season 4 yet.

Jones was thought to be the new QB1 at Independence, but the latest season detailed the struggles at the position. Jones along with the other quarterbacks at Indy were rotated in and out of the lineup. The former Yellow Jackets quarterback struggled with his confidence throughout the season. Jones suffered a hamstring injury during his first game at Indy and was never able to fully recover.

As for the upcoming season, it remains to be seen where Jones is headed next. It would not be a surprise to see Jones back at Indy following Malik Henry’s model where he ended up at Nevada after two years of JUCO ball.

Jones Is Open to a Position Change at His Next Stop

At the end of Season 4, “Last Chance U” provided a bit of an update on Jones status. The show reported that he is currently “evaluating his offers.”

Jay Jones is back home evaluating his offers. He has told recruiters he is open to a move to wide receiver.

One of the consistent critiques of Jones since his high school days has been his ability to throw from the pocket. If Jones was to switch to wide receiver, it would allow him to capitalize on his athleticism.

Former “Last Chance U” star John Franklin III was in a similar position switching to wide receiver before transitioning to cornerback at the NFL level. Jones’ Twitter bio notes he is currently in Atlanta and has not announced whether he plans to be back at Indy for 2019 season.

Jones Was a Three-Star Prospect Coming Out of High School

Jones was a three-star recruit and No. 57 ranked athlete coming out of McAdory High School in McCalla, Alabama, per 247 Sports. Jones had offers from a number of major programs including Alabama, Auburn and Minnesota. There was some confusion on Jones’ commitment to Georgia Tech after he commented on “Last Chance U” that he transferred because of the quarterback’s role primarily as a rusher in the old Yellow Jackets system.

Georgia Tech was widely known as a triple-option team under Paul Johnson, and some fans expressed surprise that Jones did not consider this prior to heading to Atlanta. Jones took to Twitter to attempt to clear up exactly what he meant in the interview.

“Y’all need full interview and not edited footage. What was said was the prior 3 qbs before my time at tech all had at least 2 1500yd+passing seasons . My time being there it’s was 2,000 rushing and lucky to have 500yd passing,” Jones explained on Twitter.

We will have to wait and see where Jones lands in 2019. It will also be interesting to see if Jones ends up switching to wide receiver at Independence or any other school. 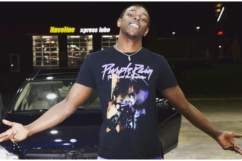