Getty Kawhi Leonard targeted Paul George to join him with the Clippers.

Kawhi Leonard’s free agency news broke just as you would expect, in the middle of the night when most fans were asleep. Kawhi Leonard signed with the Los Angeles Clippers and had been working on recruiting a second star to join him on the franchise. ESPN’s Royce Young reported that Leonard was recruiting George to join him with the Clippers, a move that ultimately worked.

Some time in the last few days, George’s agent, Aaron Mintz, called Thunder general manager Sam Presti and requested George be traded. It was a complete and total blindside to the Thunder, but came because Kawhi Leonard had been working to recruit George to join him with the Los Angeles Clippers. In the end, despite George signing a four-year deal with the Thunder last summer, he remained a free agent.

BW: “One thing that is a little piece of information from the last week. I was told that…I feel confident about this, that Kawhi and Kevin Durant spoke before KD went ahead [and committed to the Nets].”

KP: “They spoke about joining teams, possibly joining together, and I think the Clippers was the number one priority. But I think that it was just a little back and forth.”

BW: “I think KD kinda paused a little bit and was like ‘Hey, let’s consider this for a minute.’ Then he went through with his plan.”

KP: “Yeah, absolutely and that’s exactly how it went.”

BW: “So, that leads me to wonder whether or not Kawhi would like to have another star player with him in Los Angeles with the Clippers.”

Ultimately, Durant opted to join Kyrie Irving in Brooklyn, and Leonard was forced to come up with a new plan. At the last minute, the plan seemed to have worked.

It appears unlikely that Leonard would have signed with the Clippers without a second star. According to ESPN’s Adrian Wojnarowski, the Clippers gave up an unprecedented five draft picks and the right for the Thunder to swap more selections in a move made to prevent Leonard from signing with the Lakers.

The Clippers also traded Shai Gilgeous-Alexander and Danilo Gallinari to the Thunder as part of the deal. George could miss the first few weeks of the season as he recovers from shoulder surgery, per ESPN. It will be interesting to see if the Clippers trade pays off. Many expected Leonard to join the Lakers superteam, but instead, he chose to try to beat them with a team that plays in the same building. 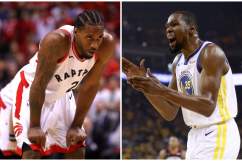