Getty Kawhi Leonard and Kevin Durant discussed teaming up on the Clippers.

Kawhi Leonard discussed joining forces with Kevin Durant on the Los Angeles Clippers, per ESPN’s Brian Windhorst. Former NBA player Kendrick Perkins also noted on The Brian Windhorst Podcast that the duo spoke about teaming up and the Clippers were the “number one priority.”

This could only be seen as a positive sign for the Clippers as Leonard thought enough of the franchise to try to recruit Durant to join him. The counter-argument is Durant headed to Brooklyn, and Leonard would be without another star if he signed with the Clippers. Windhorst’s exchange with Perkins about Leonard’s communication with Durant is detailed below.

BW: “One thing that is a little piece of information from the last week. I was told that…I feel confident about this, that Kawhi and Kevin Durant spoke before KD went ahead [and committed to the Nets].”

KP: “They spoke about joining teams, possibly joining together, and I think the Clippers was the number one priority. But I think that it was just a little back and forth.”

BW: “I think KD kinda paused a little bit and was like ‘Hey, let’s consider this for a minute.’ Then he went through with his plan.”

KP: “Yeah, absolutely and that’s exactly how it went.”

BW: “So, that leads me to wonder whether or not Kawhi would like to have another star player with him in Los Angeles with the Clippers.”

Per @WindhorstESPN, Kawhi Leonard is still interested in joining the Clippers if they find another star player with their assets pic.twitter.com/aBAkkLIduW

Windhorst later reported on ESPN that Leonard is looking to see if the Clippers can add a star to pair with him. The challenge is there are limited options available, especially with all of the major stars signed with other teams. Windhorst also detailed on the podcast what Leonard’s pitch to Durant could have entailed.

Kawhi Has Reportedly Completed Meetings With All 3 Teams & Is Undecided

"If I am Kawhi Leonard, I decide to go to the Los Angeles Lakers because based on what I'm hearing, he wants to win multiple championships and he's always wanted to go back home to Southern California." — @criscarter80 pic.twitter.com/AQdhfEnZTK

Multiple reports indicate that Leonard flew back to Toronto to have a meeting with the Raptors. It is believed to have been the final meeting Leonard had with the three teams. Fox Sports’ Cris Carter reported that Leonard is “undecided” and still considering the Lakers, Clippers and Raptors.

ESPN’s Adrian Wojnarowski reported that Leonard may continue to take his time in making a decision. No exact date has been set for an announcement and Leonard’s decision could stretch out a few more days. 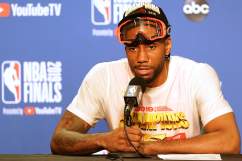