Getty Drake's pitch to Kawhi Leonard to re-sign with the Raptors included a new role with his record label, OVO Sound.

Kawhi Leonard’s lengthy free agency could be good news for the Toronto Raptors, while the Lakers chances could be in flux. Former NBA player Kendrick Perkins tweeted that Leonard stretching his decision into the weekend is “better” for the Raptors.

“Just heard that Kawhi is meeting with the Clippers tonight but the Lakers hold the upper hand, unless Doc work his Magic tonight it’s looking very strong that Kawhi will be in Purple and Gold!!!” Perkins noted on Twitter.

Kawhi Is Reportedly “Undecided” on His Decision Between the Raptors & Lakers

Do the #Lakers give Kawhi a better shot at a championship than the #Raptors? pic.twitter.com/yWDqb4jpze

There has been no timeline announced when it comes to Leonard’s decision. According to Fox Sports’ Cris Carter, Leonard is “undecided” on the Lakers and Raptors with no timetable in sight.

“#KawhiUpdate: After looking like we would find out today, we will not. Kawhi is still undecided & is not going to finalize his decision today. Also, contrary to other reports, Kawhi is NOT interested in signing a 1 or 2 year deal. When he signs, it will be a long term contract,” Carter tweeted.

Carter previously predicted that Leonard would join the Lakers on July 5th. The former wide receiver appears to have backed off his initial report.

“For Kawhi, this is about which organization is going to support his quest to be the best player in the world and get as many championships as possible,” Carter noted on Fox Sports prior to his recent tweet. “To me, the only team that presents that is the Lakers. I believe there’s going to be an announcement today.”

At different times during the process, there have been conflicting reports that Leonard was ready to sign with both the Lakers and Raptors. As expected, Leonard has been quiet during free agency, and it appears that he is encouraging teams to do the same. ESPN’s Jalen Rose reported earlier this week that the Raptors had a “99 percent” chance to bring back Leonard.

“The exact quote from Jalen: ‘What I’m 99% hearing is that Kawhi Leonard will be returning to Toronto and signing a 2-year contract, just completed his 8th season, that will put him at 10 years and put him in position to get largest maximum deal for a player of his tenure,’” USA Today’s Dan Wolken tweeted.

The Athletic’s Frank Isola bumped up the Raptors chances to “99.9 percent.”

“From what I’m hearing Jalen Rose’s 99 percent that Kawhi is returning to Toronto now sounds like 99.9 percent…There are unconfirmed reports of Kawhi enrolling one child in a Toronto school. Of course, LeBron did the same in L.A. a few years back and ended up returning to Cleveland,” Isola tweeted. 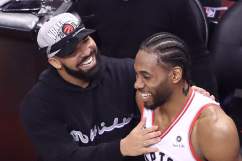