In 2014, Kansas City Chiefs star wide receiver Tyreek Hill was arrested for domestic abuse. He was accused of punching his girlfriend, who was pregnant at the time of the assault. This led to Hill being dismissed from the Oklahoma State football team.

Five years later, it is all over for Hill. After several meetings and months of deliberation, the NFL has decided to not discipline Hill. He will not face a suspension or have to pay a fine. This means that the Chiefs will have their stud receiver for the beginning of camp all the way through the season. The NFL’s decision caused mixed feelings from the public, but what does it mean moving forward for Kansas City? 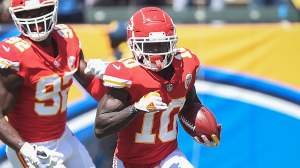 After the big news came on Friday, attention immediately turned to Hill’s contract. In March, the Chiefs made it clear that extending Hill, whose contract expires at the end of this season, would be an offseason priority. Both sides were negotiating a big contract, but the talks were put on hold when the first round of audio recordings came to light.

The question remains, is signing Hill the best move for the Chiefs?

At 25 years old, Hill has emerged as one of the best receivers in the game. He is the fastest player in the league and easily the most dangerous deep ball threat. Last season, Hill finished with 1,479 yards and scored 12 touchdowns. Despite his success, there are some causes for concern. Hill’s personal life is still a big question mark. He will have to prove that he can turn things around.

Despite all the concerns surrounding Hill, the Chiefs’ franchise and their fans hope to keep Hill around. The fact that extension talks surfaced immediately following the NFL’s decision proves that Hill remains a priority for Kansas City. Along with Patrick Mahomes, Hill could be part of a young duo that will terrorize the league for years to come. 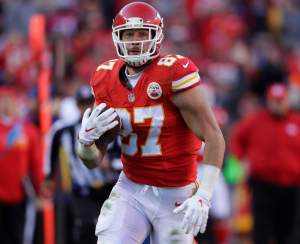 On Friday after the NFL announced that Hill would not be suspended, members of the Chiefs immediately took to social media to back their teammate. Hill is not only one of the league’s best players, he is also well liked in the locker room.

The Chiefs are well aware that having Hill on the field makes them stronger. They are Super Bowl contenders as long as Hill is healthy and lined up on the outside. Chiefs’ All-Pro tight end Travis Kelce was the first to speak out.

"Everybody knows how important he [Tyreek] is to this offense."

Hill has not been as active as he usually is on Twitter since March. On Friday, Hill released a statement on his Twitter account. In the statement, Hill took time to thank the NFLPA and commissioner Roger Goodell. He also expressed his love and appreciation for the Chiefs and the city of Kansas City. 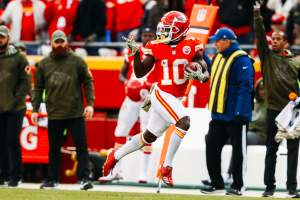 The Chiefs are 6-1 to win the Super Bowl this season. That is tied for the best odds with the New England Patriots. With Hill on the field, Mahomes has a chance to repeat as NFL MVP. The Chiefs are a 12-13 win team with high hopes of winning the Super Bowl. This decision by the NFL has impacted the upcoming season in a big way.

So, what’s next? Extending Hill should be priority No. 1 for Kansas City. Defensive lineman Chris Jones is in the midst of a hold out over a contract dispute. The Chiefs have to make decisions on two of their most important players, but Hill must come first. In a league where teams must score at a high rate to win, Hill is extremely important. As camp approaches, Hill will continue to be a hot topic who might sign a record contract when it is all said and done.