History in the making….

Whenever Serena Williams decides to retire, her daughter Olympia may be the next Williams tennis star. Olympia turns two years old on September 1st and is already picking up a tennis racket. Williams posted the above video on Instagram implying her daughter may be next in line.

“History in the making….,” Williams noted in the caption.

If Instagram is any indication, Olympia could be a multi-sport athlete as Williams’ husband, Alexis Ohanian, posted a video of their daughter showing off her soccer skills after the USWNT won the World Cup. Olympia already has quite a following with 587,000 Instagram followers.

Congratulations @USWNT! Bringing home a #WorldCup title for an unprecedented 4th time & inspiring a generation of women (and men) around the world. One little girl in particular is currently outside practicing ⚽️ @olympiaohanian. We owe it to the USWNT and everyone they have inspired this past month to keep this same energy in the coming months and year for women’s soccer in the US! ?? Go see an @NWSL match this season, and bring your friends! I know I will be. #OneNationOneTeam

Williams found out about her pregnancy with Olympia thanks to six pregnancy tests prior to competing in the 2017 Australian Open, per Vanity Fair. Williams noted she began to feel different physically and a friend recommended she take a pregnancy test.

But she felt a little different physically. She had unexpectedly thrown up at one point and her breasts had enlarged. She thought it might be hormonal. But her friend Jessica Steindorff immediately suspected something else and suggested a pregnancy test. Serena thought it was ludicrous.

Jessica worked on her for two days until Serena relented, and so Jessica went to a pharmacy and bought a pregnancy kit.

After being cleared to play by doctors, Williams went on to win the Australian Open just weeks after finding out about Olympia.

Serena Has Become an Advocate for Working Moms

Williams returned to tennis after giving birth to Olympia and has become an advocate for working mothers. Williams wrote a lengthy article in Fortune as part of a celebration of International Women’s Day.

In our fast-paced world, expectations for women continue to rise, as do workplace demands and, unfortunately, double standards. Navigating it all is especially tough for working moms, myself included—I feel the pressure both on and off the court. Even with all the resources I’m incredibly blessed to have, motherhood comes with so many unexpected challenges, especially when it’s time to go back to work.

After one of Williams’ Wimbledon victories, Ohanian praised his wife’s “mama strength.”

“#MamaStrength. What an amazing match between two women who went all out today. But the #BusinessBun means business. ? @wimbledon,” Ohanian posted on Instagram.

Ohanian also plays an active role in raising Olympia. The Reddit founder noted to Glamour that he took 16 weeks of paid leave to be with Williams and their new daughter. Ohanian also explained there are days where he takes Olympia to work with him.

“We’re raising what I hope will be an overachieving and strong daughter,” Ohanian detailed in Glamour. “I’m excited to teach Olympia so many things, to have uncomfortable conversations with future boyfriends (I can’t wait for those). But most of all I hope she learns from what she sees between us—how I treat her mother, how we support each other. I hope that will be her blueprint.” 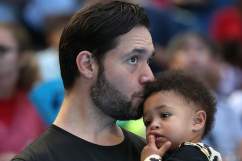