Shane Lowry's wife, Wendy Lowry, and their daughter, Iris, pictured at the Par 3 Contest prior to the 2019 Masters.

Shane Lowry’s wife, Wendy Lowry, and daughter, Iris, embraced the golfer after his first major win at The Open Championship. Wendy and Iris joined his entire family to celebrate the big accomplishment.

Shane and Wendy have been married since 2016 when they opted for a low-key New York City wedding over a major production in their home country of Ireland. Shane explained that Wendy prefers to remain out of the spotlight, but she had no problem embracing the golfer after winning The Open Championship.

“Anyone who knows Wendy knows that she doesn’t like the limelight or anything like that,” Shane noted to The Independent. “…It was really all very chilled. We woke up the next morning and were totally happy at what we were after doing. It was perfect for the two of us.”

Wendy could be seen fighting back happy tears after Shane’s big accomplishment. Iris was sporting an adorable yellow rain jacket to keep out the inclement weather as she watched her dad’s big moment.

What it’s all about ❤️

Shane entered the weekend with a lead on the field and never looked back. Prior to the final round, Shane admitted there was a bit of pressure, but he was right where he wanted to be.

“I felt like I could come here and come under the radar,” Shane explained to The Washington Post. “I’m not quite under the radar anymore. I didn’t feel like a forgotten Irishman. But hopefully, I’m the one they’re talking about tomorrow evening.”

While Shane remains competitive, the golfer admitted that fatherhood has shifted his perspective about golf. Shane emphasized to The 42 that his accomplishments on the course are icing on the cake to his family life.

“Other people probably have visions of what you should be but it’s only really down to you, what I want and the visions what I have for myself,” Shane noted to The 42. “Whether that’s to just go out and provide a life for my family, or whether it’s to go out and win as much as I can. It’s somewhere in between those. I want to win as much as I can and I get frustrated as much as anyone when I don’t win or I’m not playing well, but at the end of the day I just feel lucky I can go out and provide a good life for my family.”

Shane & Wendy Met on a “Random Night Out”

Not as fresh this morning ?

Shane and Wendy first met in what the golfer described as a “random night out.” The golfer provided a few more details to The Independent on their chance meeting.

“I met he on a random night out,” Shane said, per The Independent. “Nobody introduced us or anything and no, it wasn’t in Coppers. 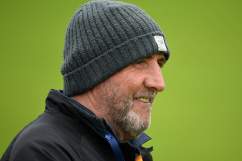 Shane Lowry’s Parents, Brendan & Bridget, Cheer Him on at The Open