The Chicago Bears announced this morning that they waived wide receiver Emanuel Hall, the much-buzzed about undrafted free agent out of Missouri. There was a good deal of hype surrounding Hall, who noted after signing with the Bears that he had over 20 offers from other teams, but decided on Chicago because wide receivers coach Mike Furrey and the Bears “stood out” to him.

Through the draft and free agency, the Bears have built a very deep wide receiving corps, and many felt that Hall’s speed and skill gave him a shot at joining them. It was a long shot–but Hall has a great deal of potential. In his junior season at Mizzou in 2017, he was second in the nation with 24.8 yards per reception, and he averaged over 20-yards per reception his senior year, as well. But his history with injuries likely kept him from earning a roster spot or making much of an impression:

Seeing a few fans quote this tweet saying their team should pick Hall up. That he was cut on Aug. 13 with three preseason games remaining warrants some tough questions. Health was an issue for him in college, again now in the NFL. https://t.co/GX5860vZ5U

Hall dealt with frequent and recurring groin and hamstring injuries in his junior and senior seasons at Mizzou, and the Bears were well aware of these issues when they signed him. His early release suggests that the team must have seen other things they didn’t like in the speedy young wideout. 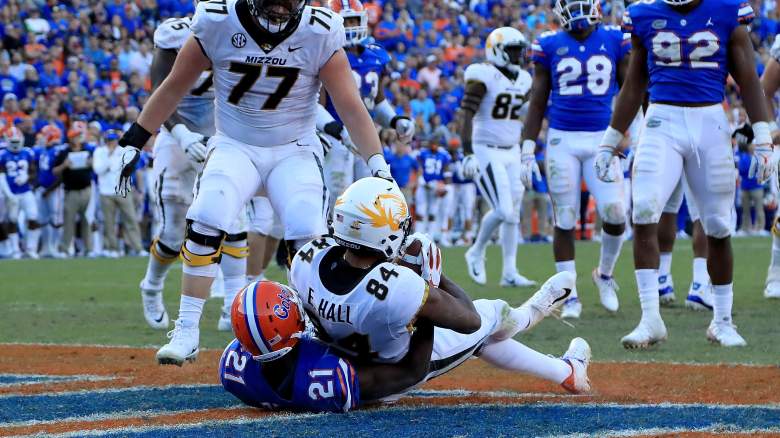 The team releasing Hall with three more preseason games left to play certainly says a lot about his progress–or lack thereof. Hall was held out of OTAs after having a surgery similar to Trey Burton’s hernia surgery, and it seems he never really made his presence felt. There have been several young players who had breakout preseasons with the Bears–but Hall’s name was never listed among them.

It’s likely that with the emergence of second year wideout Javon Wims and the drafting of Riley Ridley, the Bears have a plan in place that doesn’t include Hall. Many felt as though the Bears could place Hall on the IR for a year to mend and get a feel for pro team dynamics, and then see how well he progressed a year down the road, but the team decided not to go that route. Hall’s release isn’t out of left field–but it’s the timing of it that has left many who cover the Bears scratching their heads:

The Bears have waived undrafted rookie WR Emanuel Hall. Internally, there were high hopes for Hall back in the spring. Health has been a factor. But timing of release needs further explanation.

Hall is the first significant preseason cut so far for the Bears. The team agreed to give Hall $42,000 in guaranteed money (a $30,000 guaranteed salary with a $12,000 bonus), which is high compared to what they gave many of their undrafted free agents–breakout tight end Ian Bunting is only guaranteed $15,000.

When asked why the team waived Hall, Nagy noted that it was about “numbers:”

This reasoning by Nagy suggests that the Bears’ depth at wide receiver was the primary factor in releasing Hall, with Allen Robinson II, Anthony Miller, Taylor Gabriel, Cordarrelle Patterson, Riley Ridley, and Javon Wims all significantly ahead of him both on the depth chart, and experience-wise. Nagy also praised UDFA Marvin Hall in the same post-practice press conference:

The Bears signing Marvin Hall seems like a long shot, but it’s interesting Nagy took the opportinuty to single him out. The Bears’ next preseason game is at MetLife Stadium against the Giants on Friday night, giving the remaining undrafted free agents vying for a spot another chance to showcase their talents.

READ NEXT: Javon Wims Among 5 Under The Radar Bears Slated to Make an Impact