Getty Former Ohio State player Aaron Craft is one of the top players for Carmen's Crew.

Carmen’s Crew takes on the Golden Eagles in The Basketball Tournament championship game. The matchup is essentially former Ohio State players squaring off with Marquette alumni. College basketball fans will recognize some of the names on each team’s roster.

Former Buckeyes guard Aaron Craft is one of the top players on Carmen’s Crew. The coaching staff is also made up of Ohio State legends with Scoonie Penn, Jared Sullinger and Evan Turner. For the Golden Eagles, Travis Diener is one of the recognizable names among the former Marquette players.

The TBT field included a number of other teams made up of former college players including Kentucky, Arkansas, Kansas, Syracuse, Wisconsin and UCLA among others.

The Basketball Tournament Was Started by Jon Mugar

Founder Jon Mugar did not come from a sports background, but he got the idea for the tournament as he was knee-deep in comedy work. Mugar wondered what kind of basketball tournament he could create if there was a sizable purse up for grabs. Mugar admitted to the Boston Herald in 2018 that the event has surpassed his early expectations.

“If you told me five years ago that we’d be watching Jared Sullinger in his mid-20s with Greg Oden in his late 20s, Aaron Craft in his 20s playing basketball against Jimmer Fredette in his 20s . . . and we’re on ESPN, then it’s an absolute home run success,” Mugar noted to the Boston Herald.

Travis Diener (@DienerTravis) has ICE IN HIS VEINS! ❄️?

Diener hit a late three against Team Hines to ice the semifinal game for the Golden Eagles. Diener’s shot secured their spot in The Basketball Tournament in the championship game. Diener explained the strategy behind the three to the Milwaukee Journal Sentinel.

“In that situation, in the Elam Ending, it’s hard to play in the half court,” Diener explained to the Milwaukee Journal Sentinel. “Because it’s very physical and the refs aren’t going to decide the outcome. So in the huddle, we were talking, if we get a rebound or even on a made shot, let’s push and get something right away. They lost me a little bit, and once you see what’s happening, I knew I could get a shot off and fortunately it went in.”

Here is a look at the rosters for the Golden Eagles and Carmen’s Crew. 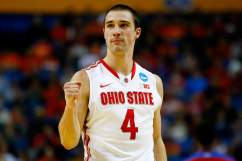 The Basketball Tournament Purse: How Much Money Does TBT Winner Make?

Read More
Basketball, College Basketball
Check out The Basketball Tournament rosters for Carmen's Crew and Golden Eagles. Find out what players are in TBT championship game.