Tate Martell is a backup quarterback for the Miami Hurricanes, but his offseason buzz suggested he had starter potential. He transferred to Coral Gables from Ohio State after the Buckeyes imported former Georgia 5-star Justin Fields. Martell earned an immediate eligbility waiver from the NCAA.

Outside of his highly-publicized position battle with starter Jarren Williams (and fellow reserve N’Kosi Perry), Martell has made waves for his relationship off the field with Instagram model Kiki Passo.

Martell is 21, while she is a 22-year-old from Brazil. She specializes in bikini modeling a beach lifestyle photoblogging. Here’s what you need to know about the couple.

1. She Works as a Model for Dan Bilzerian’s Ignite Brand

Passo first major paid gig as a model came with social media celebrity Dan Bilzerian’s cannabis brand Ignite in late 2018. The Armenian-American entrepreneur started a $1 million model search to promote the business, which sells cannabis products in licensed dispensaries in states where its sale is legal.

According to People, Passo went through a casting process that brought her to auditions in Las Vegas and Los Angeles.

The model search is simple: women will submit their portfolios online through the Ignite website. From there, semifinalists will be selected to attend one of two in-person live castings: one in Las Vegas, one in Los Angeles.

The field will then be narrowed to a group of models who will go to Los Angeles for the final round. The 10 winners will be selected and announced in September. These 10 women will receive one-year, $100,000 contracts to represent the brand at events, conferences and dispensaries.

She also does sponsored work for Fashion Nova, an online clothing store. Passo’s most recent post showed her in a a rose bikini with the caption, “how’s my back to school outfit.”

She currently has 869,000 followers on Instagram. That’s well over three times his following on the platform, and over 700,000 more followers than his Twitter page.

2. Passo Slid Into Martell’s DM’s to Start the Relationship

Martell announced his transfer to Miami on Jan. 16, just two weeks after Ohio State beat Washington in the Rose Bowl. He found his way to the city by at least Feb. 17, as he was in attendance at Nike’s The Opening Regional.

While it’s unclear exactly when Passo and Martell started dating, the gap between the initial picture and his arrival on campus in Coral Gables suggests there were a few months of single life in South Beach.

it’s the time of year when it’s not all about me… instead, it’s all about the ?? #gocanes (comment your predictions, winner gets a follow!)

Just hours before Martell’s Hurricanes kick off the 2019 season against Florida on Saturday night in Orlando, Passo posted a picture of her wearing Miami colors with the No. 18 on her top. Martell has worn that number all throughout college.

“it’s the time of year when it’s not all about me… instead, it’s all about the ?? #gocanes,” she wrote in the caption.

During Miami’s 10-0 start to the 2017 season, she also posted a picture of her wearing the Miami Turnover Chain. Hurricane defenders don the chain after forcing and recovering a fumble or intercepting a pass. She was also donning a black croptop with a green and orange Miami logo on the front.

All of this was before she even met Martell, as he was redshirting at Ohio State at the time. That means she was a diehard Miami fan even without dating one of the players.

with me through it all ❣️ @thetatemartell

Martell might not be in Miami much longer. Sites such as Sports Illustrated pegged him as the favorite to win the quarterback job, but Hurricanes head coach Manny Diaz decided to go with Williams due to his “upside.”

It’s not clear yet if Martell is even the backup to Williams, as Diaz still has him competing with redshirt sophomore N’Kosi Perry. The head coach has even gone as far to say that Martell could switch positions to help at wide receiver.

“It’s like anybody else we have,” Diaz said per The Spun. “Anybody will help by doing anything that’s available, so yeah.”

As CBS Sports’ Barrett Sallee points out, the receiver room is already full of talent, including Junior Jeff Thomas, Buffalo transfer K.J. Osborn and junior Mike Harley. “All are expected to be key contributors outside, and all three are speedsters who are dangerous in space,” Sallee writes.

That might be too much to swallow for the former No. 2 dual threat quarterback in the 2017 class (per 247 Sports). Miami long snapper Mason Napper even shared on Snapchat an image of Martell’s nameplate found on the floor of the locker room, suggesting he’ll be out the door soon.

That would obviously complicate things with Passo, unless he were to transfer to nearby Florida International, or even Florida Atlantic in Boca Raton.

5. She Offered Support After He Lost the Job

Shortly after losing the quarterback job, she also offered some words of encouragement to her new bae. “To the strongest and most amazing person I’ve ever met, I love you to the moon,” she wrote on her Instagram story.

He has done well in reserve time when he’s actually hit the field. He completed 23-of-28 passes for 269 yards and a touchdown last year in Columbus. He also added 22 carries for 128 yards on the ground, punching in two more scores.

Miami has run more of a pro-style scheme over the last few decades, so Martell’s dual-threat abilities may force him to a smaller school’s spread scheme, such as Nevada or UNLV.

It may be hard for Martell to leave Miami with Passo in town. As the season progresses and the possibility of a potential transfer continues to develop, it will be worth watching how the couple copes with the transition. 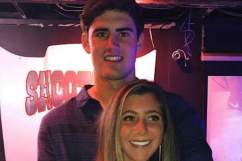