Getty Ben Roethlisberger will miss the 2019 season with an elbow injury.

Ben Roethlisberger will miss the rest of the 2019 NFL season with an elbow injury, but the Steelers quarterback has made it clear he does not plan on retiring. The Steelers have not released many details on Roethlisberger’s injury only noting that it did not require Tommy John surgery, per ESPN.

“There is complete optimism that he will be ready to roll next season,” a source told ESPN. “No one is concerned that next year is going to be a problem.”

Steelers head coach Mike Tomlin noted that Roethlisberger plans to play through his contract which runs until 2021.

“He fully intends to come back from his injury, and everything we’ve heard, we’re comfortable that’s a strong possibility,” Tomlin explained to ESPN.

The Steelers noted in a statement released on September 16 that Roethlisberger’s injury did require surgery.

Ben Roethlisberger had an MRI on his right elbow Sunday evening and it was determined by the Steelers’ medical team that surgery will be required. We expect the surgery will be scheduled for this week. He will be placed on our Reserve/Injured List and is out for the season.

Roethlisberger left the Steelers’ Week 2 matchup against the Seahawks at the end of the first half which would end up being his last game of the season.

Ben Roethlisberger Season Ending Injury | Steelers vs Seahawks | NFL Week 2 2019Shoutout to SeatGeek for sponsoring the video use code DINGPRODUCTIONS to get $20 off your first order: https://sg.app.link/teamseatgeek MY OTHER CHANNEL!!! https://www.youtube.com/channel/UC3VK&hellip; Beat in my Seatgeek Intro: https://youtu.be/8584VbUJubY Business Email: Moreofmmd@gmail.com Make Sure to follow my socials If you wanna stay updated with me! Twitter: https://twitter.com/Official_ding Instagram: https://www.instagram.com/ding_prod/ Thanks For Watching! Make Sure to Subscribe…2019-09-15T18:56:40.000Z

Roethlisberger was spotted at a Steelers practice leading up to their Monday Night Football matchup against the Bengals. JuJu Smith-Schuster discussed how much the Steelers quarterback means to the team.

“Just a great guy, you know?” Smith-Schuster explained to Steelers.com. “He’s out there supporting us. As a captain, he’s going to ride with us whether he’s not in a game or in a game. Everyone’s hand put in the pile.”

Doctor Reviews Ben Roethlisberger SEASON ENDING Elbow InjuryBen Roethlisberger injured his elbow and requires season ending surgery. He will miss the remainder of the 2019-2020 NFL season. Week 2 of the NFL was all about UCL injuries, with Drew Brees also injuring the ligament in his thumb, requiring surgery. In this video I'll explain the fear with Ben Roethlisberger, the UCL tear.…2019-09-16T23:21:01.000Z

The Steelers announced Roethlisberger underwent successful surgery in September. The Pittsburgh quarterback is expected to recover in time for the start of the 2020 season.

Once Ben returns to Pittsburgh, he immediately will begin working with the Steelers’ medical staff on his rehabilitation, and he is expected to make a full recovery and return to the field for the 2020 NFL season.

Mason Rudolph is expected to be the team’s starting quarterback for the rest of the season. The Steelers front office was high on Rudolph coming out of Oklahoma State. Rudolph’s high school coach Kyle Richardson recalled a funny story to ESPN about Tomlin visiting Clemson where he now is an assistant.

“‘You coach that Rudolph kid?'” Richardson recalled Tomlin asking, per ESPN. “He was like, ‘Man, he’s a great player.’ Pretty ironic a year later they go and draft him. And then a year after that, he’s sitting here, going to be the starting quarterback in Pittsburgh.” 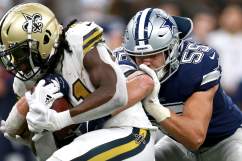 Read More
Football, NFL, Pittsburgh Steelers
When will Ben Roethlisberger return to play for the Steelers? Find out the latest news on Roethlisberger's injury and why he does not plan to retire.