Getty Matthew McConaughey graduated from the University of Texas.

Matthew McConaughey not only is a major Longhorns fan, but the actor graduated from the University of Texas in 1993. It was the same year McConaughey had his breakout performance in the movie Dazed and Confused.

McConaughey is a staple at Texas sporting events and is more than just a superfan. The actor is teaching a class on film this fall at the university, and he was previously a visiting instructor at the school, per The New York Times.

“It’s the class I wish I would have had when I was in film school,” McConaughey said, per The New York Times. “The elements of truth and genuine joy for the process are timeless. That will always be our classroom focus.”

McConaughey Is the Celebrity Guest Picker on College Gameday

Texas is hosting LSU in the biggest Longhorns home game we have seen in some time. ESPN’s College Gameday is in Austin in celebration of the primetime game, and McConaughey was named the Celebrity Guest Picker for the show. The actor took to Twitter to encourage fans to attend the popular ESPN show.

“Dear Longhorn Nation, LSU is coming to our backyard on the 40 and its time to get it on!!! I’ll be the guest picker on ESPN’s @CollegeGameDay this Saturday before the game. ESPN at 8am CT. OWN IT. Hook Em, mcConaughey,” McConaughey tweeted.

McConaughey Was Named the Minister of Culture at Texas

Prior to the actor’s class, McConaughey was named the Minister of Culture at Texas. While the role may sound made up, it is something McConaughey takes seriously and a title more common in Europe.

“It starts in my house,” McConaughey explained to The Athletic. “It’s my family. It’s Austin. It’s Texas. I’ve been the UT and Austin mascot for 25 years, you know what I mean?. That’s great. But I want to dig in. I’m ready to get from the inside out. Let’s build some things. Let’s do some things.’’

When McConaughey initially started attending Texas in 1989, he had dreams of becoming a lawyer. McConaughey would later ditch these plans for the idea of becoming an actor after he completed a couple small roles. A chance meeting at the Hyatt bar with a film director would change his trajectory and help him land his part in Dazed and Confused, per The Athletic.

“I believe in living in the present and making each day count. I don’t pay much attention to the past or the future.” #AO1

McConaughey attends the same church as Texas quarterback Sam Ehlinger, per The Athletic. Given the actor’s strong ties to the university, it is no surprise the duo has developed a relationship. Ehlinger recalled the actor’s advice before he was about to take the field.

“I think before one game he kinda made me stay still and told me, ‘OK, think about this: Put this whole world into perspective — how many quarterbacks are there for the University of Texas that are about to walk out on this field on the first play?’” Ehlinger said, per 247 Sports. “I was like, ‘One.’ And he was like, ‘And you’re that guy. So go be that guy.’ So I was like, ‘Alright. Sounds good.’” 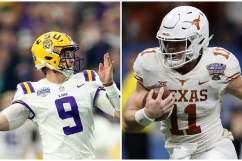