By now, most of the NFL world has seen Baker Mayfield’s speedy sprint down the field during Nick Chubb’s 88-yard touchdown run against the Baltimore Ravens last week in the team’s convincing 40-25 victory.

Chubb reached a speed of 21.95 mph on the play, the second fastest for a ball-carrier this season. Mayfield, according to Next Gen Stats, reached 18.92 mph on the play, his fastest speed on any play this season — all just to celebrate with his running back in the end zone.

“I have to open the legs a little bit more,” Mayfield joked when talking to reporters Thursday. “I have more in the tank.”

Here’s the video of the run for anyone who might have missed it.

Baker Mayfield's out there sprinting to support his teammates ?

Just to add to the hilarity of Baker’s arm-waving, celebratory run was the reaction of his wife, Emily. One user wrote on a photo of the run saying, “He looks like he’s about to jump into the arms of his lover.”

Emily Mayfield responded: “Nah, he doesn’t look that excited coming towards me.” 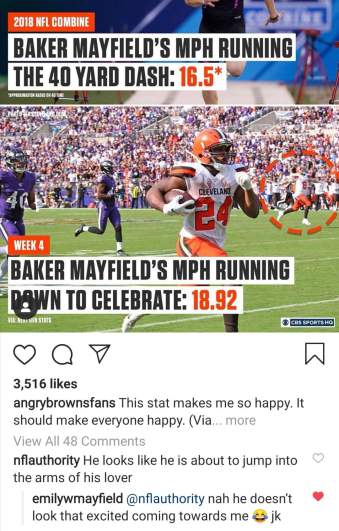 Chubb helped lead the way to the Browns biggest win of the season with 165 yards on 20 carries and 3 touchdowns — including the long 88-yard run that put the Browns up 30-18.

He was named the FedEx Ground Player of the Week, beating out Jacksonville’s Leonard Fournette and Bills veteran Frank Gore. According to the team’s website, Chubb became the first Brown to record three rushing touchdowns in a game since Peyton Hillis in 2010, and he also recorded the most rushing yards ever by a Browns player against the Ravens.

Mayfield praised Chubb for his no-nonsense approach to the game and his desire to just win football games.

“He is just an all-around [good] guy of who he is. He puts his head down and goes to work,” Mayfield said. “You have to talk to him and dig to get information and get a couple of words out. He is a great guy overall. He really just cares about winning, and he is a great teammate.”

Head coach Freddie Kitchens echoed those sentiments about his second-year running back.

“Nick, first and foremost, is an excellent individual. He works his tail off every day he walks on the football field, walks into the weight room or walks into the classroom,” Kitchens said. “You know exactly what you are getting from Nick every time he walks out there. Every time the clock starts turning, you know what you are going to get from him. After all of that, you throw in his ability, his skillset, his desire inside within to be successful and his resilient nature and chasing being good. I do not know what else you want in a football player.”

Veteran wide receiver Rashard Higgins — the Browns longest tenured pass-catcher who has missed the last three games — returned to practice on Thursday. Higgins has been dealing with a knee injury he suffered in the team’s opener.

Higgins might not be the only Brown returning to the lineup. Speedy pass-catcher Antonio Callaway is set to be activated after a four-game suspension for violating the league’s substance abuse policy.

“You can tell he’s been itching to get back out there,” Mayfield told reporters on Thursday. “He’s a speed guy and someone a built a great rapport with last year. He looks great right now — he’s running around fast.”

It comes at the perfect time with Jarvis Landry in concussion protocol. There’s been no word on Landry’s progress, but he does have an extra day to get on the field, with the Browns playing on Monday this week in San Francisco.