Getty Max Scherzer will miss Game 5 of the World Series with back spasms.

Max Scherzer was scheduled to start for the Washington Nationals tonight in a pivotal Game 5 of the World Series, but an injury will sideline the pitcher against the Houston Astros. Leading up to Game 5, Scherzer was battling back spasms that unfortunately caused him to miss his scheduled start. Nationals manager Dave Martinez announced the news just hours before the game’s first pitch.

Scherzer’s injury also extended into his neck, and the Nationals will look to start the pitcher in Game 6 or Game 7, if necessary. Martinez told Fox Sports that the team would try to send Scherzer to the mound either of the next two games and noted the pitcher would “definitely” start if there is a Game 7.

Scherzer elaborated on the injury after the decision was announced by the team noting he could not dress himself after he woke up the morning of the game.

“When I woke up this morning it was completely locked up,” Scherzer told ESPN. “It’s not just a muscle spasm. The nerve that’s in the neck is all jammed up…I had to fall out of bed and pick myself up with my left arm. I couldn’t even dress myself. I had to have my wife help me.”

BREAKING NEWS: Max Scherzer will not start today due to injury. pic.twitter.com/TptjRYjrpk

The surprising announcement shows both how significant and surprising Scherzer’s injury is considered. Martinez noted that Scherzer “has to be hurting” for him to miss a chance to help put the Nationals within one game of winning the World Series.

“For Max to miss a game like this, he has got to be hurting,” Martinez told Yahoo Sports. “He’s really upset and wants to be out there with his teammates…He was in there with the training staff yesterday getting all kinds of treatment. He woke up and told them right away he was really hurting.”

Max Scherzer on how to be a leader on a team on days you don't pitch. pic.twitter.com/MdBBtoYngQ

Prior to Scherzer’s injury, Stephen Strasburg was projected to make the start for the Nationals in Game 6. Justin Verlander is expected to pitch opposite of Strasburg for the Astros. Ahead of Game 5, Scherzer emphasized the team believes that Ross can do what it takes for the Nationals.

“Watching Joe Ross pitch the other night, I thought he looked extremely polished in what he was able to do,” Scherzer noted to USA Today. “In our clubhouse we just believe the next guy up can always get the job done. Right now it’s come down to Joe.”

It will be interesting to see how Scherzer’s injury impacts tonight’s game and the rest of the World Series. It is a big blow for Washington given how well they started the series. 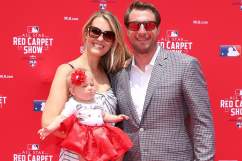 Read More
Baseball, MLB, Washington Nationals
What happened to Max Scherzer and why is he not pitching for the Nationals tonight in Game 5? Find out more about Scherzer's back spasm injury.