Getty Melvin Gordon is a fantasy football start for Week 5.

“We have a plan for Melvin,” Lynn told ESPN. “I don’t want to put him in there and play him too much. And I really don’t have to. I like what Austin Ekeler has been doing in the backfield. … Whenever [Gordon is] ready to go, he will be the No. 1 guy and get the bulk of the snaps. But obviously he’s not there right now.”

Earlier in the week, Lynn explained that Gordon would indeed have a role against the Dolphins with the potential to start.

“”He’s definitely going to be part of the game plan…He may even start this game,” Lynn told Sirus XM NFL Radio.

It sounds like the two backs are going to split touches, and you can expect Ekeler to be the passing downs back. This makes Ekeler especially valuable in PPR leagues. Feel free to reach out on Twitter @JonDAdams with questions about the Chargers backs or general fantasy football inquiries.

Gordon Is Motivated to Prove People Wrong After Holdout

Gordon owners would like to see less of Ekeler, but the good news is it sounds like the Chargers running back is motivated to prove people wrong. Gordon believes his holdout flew under the radar when compared to Ezekiel Elliott.

“I’m definitely motivated,” Gordon told Orange County Register. “No one cared that Melvin Gordon was out. It was all about Zeke. And it ain’t no hate. That’s America’s team, but some players on talk shows they care less to talk about it. You got people in your corner, and they in your corner one second, and the next second, they’re hating on you. You got a lot of people hating on you. The best way to do that is to go shut them up. I remember what everybody said.”

Gordon Admitted That He Does Not Expect to Get 20 Carries

Gordon’s upside is too much to sit him today in most cases. The running back admitted he does not expect to get 20 carries but noted that is typical of his workload most weeks.

“I don’t really know, but I’m eager to find out,” Gordon noted to ESPN. “I think it will be a lot of me and Austin flipping — me going in, and then him going in — flip-flopping. We’ll be splitting the ball a lot. I know people think I’m going to get 20 carries, but I didn’t really get 20 carries a game last year when I was in. I just kind of made the best of the small amount of carries that I got. We’ve got so many players, the ball goes around to everybody, so you’re kind of licking your chops when you get your turn.” 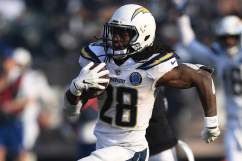 Read More
Fantasy Football, Football, melvin gordon, NFL
Should you start or sit Melvin Gordon and Austin Ekeler this week in fantasy football? We break down Gordon and Ekeler's fantasy value for Week 5.