Getty Dwyane Wade, formerly of the of the Miami Heat, attends the game between the Miami Dolphins and Chicago Bears at Hard Rock Stadium on October 14, 2018 in Miami, Florida. (Photo by Mark Brown/Getty Images)

After the Chicago Bears won their first game since late September against the Detroit Lions at Soldier Field Sunday, spirits were high in and around Halas Hall.

It wasn’t pretty–the Bears beat a Lions team with a wretched defense who also played without starting quarterback Matthew Stafford–but the Bears still found a way to finish the game, and that’s crucial for the morale of the team going forward.

It was also crucial for Bears’ starting quarterback Mitchell Trubisky, who has had a bad week on top of a season full of disappointment. Trubisky’s week was highlighted by a comment he made to the press when asked about how he focuses and tunes out extraneous noise.

His response, while presumably tongue-in-cheek, made national news:

“Trying to get some of these TVs in the building turned off because you’ve got too many people talking on TV about us and what they think about us—what we should do, what we are and what we’re not. But they don’t really know who we are, or what we’re capable of as people, or what we’re going through, or what we’re thinking. It’s just the outside viewers looking in. So tunnel vision, ear muffs and just come to work every day and try to get better and get back to what we know we’re capable of doing.”

A week-long debate began about Trubisky and whether or not he was soft for acknowledging that he didn’t want to listen to critical media while at Halas Hall. Thus, when Sunday rolled around and Trubisky turned in a turnover-free performance (he was 16-23 for 173 yards, three touchdowns, and no interceptions) and the Bears finally ended their four-game losing skid, Twitter had some things to say about Trubisky. 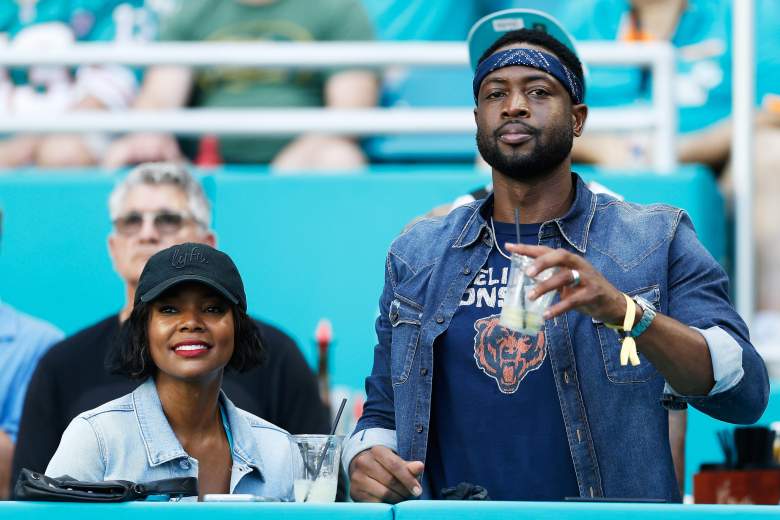 GettyDwyane Wade of the Miami Heat and wife and actress Gabrielle Union attended the game between the Miami Dolphins and Chicago Bears at Hard Rock Stadium on October 14, 2018 in Miami, Florida. (Photo by Marc Serota/Getty Images)

After the Bears’ victory over the Lions Sunday, Sports Illustrated tweeted a Kalyn Kahler article about Trubisky, saying “After a win against the Lions, Trubisky can finally turn the TVs back on.”

Three-time NBA champion–and very huge Chicago Bears fan–Dwyane Wade has weighed in on the TVs in Halas Hall debate when he re-tweeted Sports Illustrated, saying in response: “Nope. Keep those TVs off!!!”

Wade has been frequent and vocal in his support of the Bears over the years, especially on Twitter, so it’s no surprise to see him weigh in on this issue.

Wade is a three-time world champion, however, so perhaps it’s not a bad idea for Trubisky and the still-struggling Chicago Bears to take his advice. He may know a thing or two about tuning out the media and other such noise.

Last year, during the Bears’ 2018 first-place campaign, Wade told the Chicago Sun-Times that Trubisky had “all the potential to be one of the game’s great quarterbacks.” The last stretch of games coming up for the Bears will go a long way to determining that.