After the New York Jets beat the New York Giants 34-27 to pull to 2-8 on the season, Jets safety Jamal Adams took to Twitter to celebrate the team’s victory–and to perhaps talk a little smack to the opposition.

Adams also decided to celebrate one play specifically. Early in the third quarter, he blew past a block thrown by Giants running back Saquon Barkley while rushing quarterback Daniel Jones. Adams snatched the ball out of Jones’ grasp and promptly ran it into the end zone for a touchdown. Adams retweeted a video the play, with the phrase “Gimme that!!”:

But Adams didn’t stop there. He then tweeted out a popular Spongebob Squarepants gif featuring Patrick the Starfish snatching a purse out of Spongebob’s hand while playing the role of a burglar and saying: “I’ll be taking that.” Adams included the word “Mood,” along with a laughing emoji in the tweet:

Naturally, several fans had comments to add to Adams’ posts:

You must be fun at parties

Adams and the Jets haven’t exactly had the most upbeat and positive season, but they scored the final 13 points in the game, and celebrations have been few and far between for the Jets this year. The play was one of 17 turnovers on the year for Jones, who saw his Giants also fall to 2-8 on the season.

It was a rare moment of light-heartedness for Adams this season, as he was the subject of trade rumors prior to the trade deadline a few weeks ago–rumors he didn’t seem to take very kindly to. 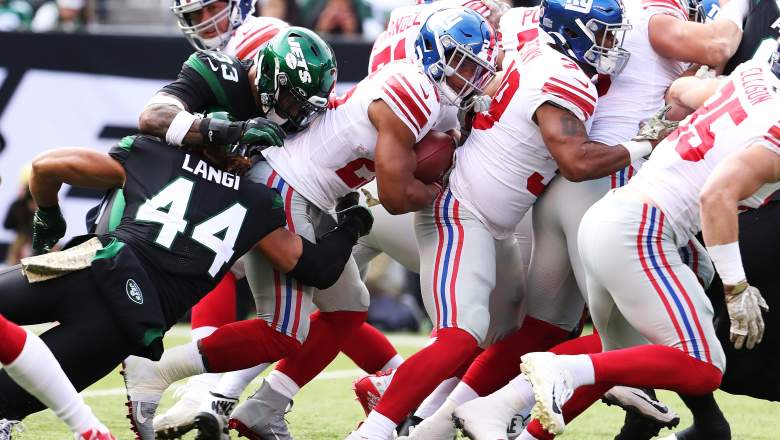 GettyEAST RUTHERFORD, NEW JERSEY – NOVEMBER 10: Saquon Barkley #26 of the New York Giants is tackled by Jamal Adams #33 and Harvey Langi #44 of the New York Jets during their game at MetLife Stadium on November 10, 2019 in East Rutherford, New Jersey. (Photo by Al Bello/Getty Images)

Adams was adamant when asked about rumors that the Jets almost traded him to the Dallas Cowboys on the final day of the trade deadline in late-October:

Adams wasn’t the only big-name star on the Jets team to hear his name swirling amidst trade rumors–running back Le’Veon Bell was also the subject of trade rumors, but Bell never publicly voiced any dissatisfaction. It’s noteworthy that at the end of the clip Adams shared of his strip-of-Jones-turned-touchdown, the game’s announcers said this about the Jets and Adams: “They were trying to trade him? I don’t think so. You do not let this type of football player leave this organization.”

Adams and the Jets will visit the Washington Redskins next week.