LSU quarterback Joe Burrow has been the biggest riser ahead of the 2020 NFL draft. Burrow is now seen by many analysts to be the second-ranked quarterback behind Alabama’s Tua Tagovailoa heading into next year’s draft.

He leads the country in completion percentage at 78.6%. With a great release, much better accuracy at all levels of the field and enough athleticism to maneuver the pocket to evade rushers, Burrow reminds me of Tony Romo. Coaches rave about his leadership and toughness too. I said a few weeks ago that Burrow is playing like a top-15 pick, but he keeps rising, and people I’ve talked to are extremely impressed.

The Athletic’s Dane Brugler has Burrow as his No. 2 quarterback and fifth-ranked overall prospect. Brugler believes that the No. 1 pick is still within reach for Burrow if he has a strong close to his college career.

After the first month of the season, the LSU passer moved his name into the first-round discussion. But after the first two months, Burrow has proven to be a legitimate top-10 overall contender. With an impressive final month? The No. 1 overall pick could be on the line.

Burrow Has a Chance to Be the No. 1 Pick

Tagovailoa may have a lead on Burrow to be the top quarterback selected, but it does not seem insurmountable for Burrow to overcome. Bleacher Report’s Matt Miller reported that Tagovailoa’s injury history could open the door for Burrow to move into the No. 1 spot.

“Burrow just has it,” an anonymous quarterbacks coach told Bleacher Report. “You can’t coach it; you can’t develop it. Some guys just have it. Baker [Mayfield] has it. Gardner Minshew has it. The difference is that Burrow has better size than both and a much better arm than Minshew.”

The two quarterbacks have taken different paths to get on the radars of NFL teams. Tagovailoa was a highly-touted recruit when he arrived in Tuscaloosa with a strong Elite 11 performance.

Burrow began his college career at Ohio State where he played sparingly before finding a new home in Baton Rouge where he has thrived in the new LSU offense. Miller has Burrow ranked as his No. 5 ranked prospect and second quarterback on his latest big board.

Heading into the showdown with Alabama, Burrow’s numbers are out of this world. The LSU quarterback has thrown for 2,805 yards, 30 touchdowns and just four interceptions while completing close to 79 percent of his passes. ESPN’s Todd McShay has Burrow as his third-ranked quarterback and No. 15 overall prospect.

Burrow appeared to be a fringe NFL prospect a year ago, but now he’s become a potential first-rounder. He is making quicker decisions with the football, displaying complete control of the Tigers’ offense and extending plays — he’s a better athlete than people give him credit for. And he’s shown good accuracy throwing into tight windows, too. 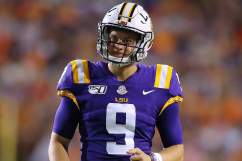