Getty LSU quarterback Joe Burrow is the favorite to be the No. 1 pick in the 2020 NFL draft.

No quarterback has done more this season to improve his NFL draft stock than Joe Burrow. The LSU quarterback has put himself in the discussion among the top quarterbacks with the potential to land in the first round of the 2020 NFL draft. ESPN’s draft analyst Todd McShay discussed Burrow’s ascension on The Ryen Russillo Podcast.

He’s playing his ass off. He is a totally different quarterback than the one that I saw last year and if he keeps this up then, yes, he is going to be involved [among the top quarterback prospects]. …Burrow is, to me, the single player who is most different or most changed than the player I saw from a year ago, and I am interested to see if he can keep it up…Burrow, I don’t even know what to do with right now, because I thought he was, you know, maybe a seventh-round free agent coming into the year. He’s playing like a potential Day 2 pick, and I got to study more of it. He is in such control of the offense and just knew where to go with the ball. It is like it all clicked. I know he is a coach’s son and I have sat with him for 30 minutes and talked to him. He is a different cat, but he is a smart cat. I just feel like he is finding his zone. Sometimes it is just confidence like anything in life.

Through five games, Burrow has thrown for 1,864 yards, 22 touchdowns and just three interceptions while completing more than 78 percent of his passes. Tua Tagovailoa has emerged as the favorite to be the top quarterback selected in the 2020 draft, but Burrow has put himself in the conversation with the top remaining quarterbacks including Justin Herbert, Jake Fromm and Jordan Love. Bleacher Report’s Matt Miller has Burrow ranked as the No. 17 player in his latest big board and the second-ranked quarterback.

Strengths: Burrow has a unique toughness about him which is something that his teammates rally around. A perfect example was his ability to shake off a vicious hit from a UCF defender during the Fiesta Bowl on a play that looked like it would sideline the LSU quarterback. Burrow not only bounced back up but did not miss any time.

Burrow has been extremely accurate and avoided mistakes to start the season. It has been a while since the term explosive was used to describe LSU’s offense, but Burrow is leading the charge. Burrow does his best work in the pocket, but is mobile enough to keep the opposing defense honest. When pressured Burrow has the ability to step up in the pocket and hit his receiver even when he knows the contact is coming.

Weaknesses: Burrow’s main knock is that we have a small sample size of seeing him look like an elite quarterback. Burrow had a solid 2018 season with 2,894 passing yards, 16 touchdowns and five interceptions but his play was not to this level. Outside of Texas, LSU has not faced a lot of major tests this season, but the Tigers are starting to get to the meat of their schedule.

Burrow needs to prove he can keep up his high-level of play against the top SEC defenses. Burrow is going to be compared to other quarterbacks who have more of a body of work since he began his career as a backup at Ohio State.

Summary: If Burrow continues his stellar play, the LSU quarterback has a real chance to be a first-round pick in next year’s draft. Burrow will have the opportunity to show he has pro potential against a few great defenses remaining on the LSU schedule. It would not be a surprise if Burrow’s play declined just a bit with the improved competition, but he is still likely to be a top quarterback prospect unless there is a meltdown during the second half of the season. 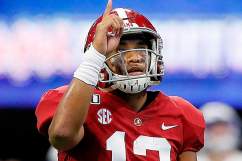