The Denver Broncos are currently 3-6, but they’re also fresh from a 24-19 win against the Cleveland Browns. The win is noteworthy largely because they beat the Browns the first game after their starting quarterback, Joe Flacco, was placed on injured reserve.

Broncos backup quarterback Brandon Allen took over for Flacco, and in his first game as a starter, he went 12-20 for 193 yards, two touchdowns and no interceptions. The 24 points scored by the Broncos against the Browns tied their season high, and one player in particular seems excited about the way the offense is looking. 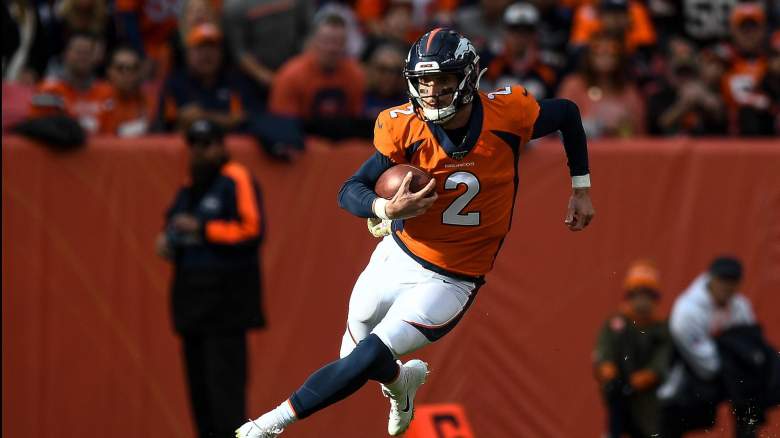 GettyDenver Broncos quarterback Brandon Allen won his first game as a starter with the Broncos. (Photo by Dustin Bradford/Getty Images)

Broncos running back Phillip Lindsay went on RapSheet + Friends to talk with NFL insider Ian Rapoport and Co. about the Broncos most recent win and the team’s season so far. When asked how the Broncos have dealt with losing their starting quarterback and win with the inexperienced Allen, Lindsay said:

“We were confident in him because he was confident in himself…he knows the terminology real well…he makes plays. He’s able to make plays with his legs, so we kind of felt like going into the game that we had the upper hand because he can move around a little bit and make plays on the run, which, in the NFL today, that’s how you get your big plays.”

Lindsay went on to reference the guy who replaced Flacco in Baltimore–Lamar Jackson. “You look at somebody like Lamar Jackson, and you’re scared because he puts another element on the field, where you gotta cover him…Lamar’s making history right there in front of our eyes. He’s exciting, and I laugh at everyone who doubted that man,” Lindsay said, also noting how much respect he has for Jackson and how difficult it’s going to be to stop him.

So how is this a slight on Flacco? First, Flacco is notoriously immobile, which has been one of the major criticisms against him throughout his career. He also endlessly praised Flacco’s replacement while not mentioning Flacco or talking about him at all.

Lindsay also said that the team no longer felt they needed to rely so heavily on their defense to win games now, noting that the Broncos offense is now able to eat up some clock and get the necessary first downs they need to close games out in the last several minutes.

This could be another reference to Flacco, who noted after the team lost to the Colts that it felt as though they were playing like they were scared to win in the last few minutes. Lindsay referenced that game specifically: “against the Colts, we had the same opportunity and didn’t execute,” he said, while noting how the Broncos performance as an offense has improved overall.

Next, Lindsay and Allen will head to Minnesota to take on the 6-3 Vikings, where they’ll face a tougher test than they did against Cleveland.

Read More
Denver Broncos, Football, Joe Flacco, NFL
Denver Broncos running back Phillip Lindsay went on RapSheet + Friends, and had some insight as to why the Broncos offense is better now than it was weeks ago.