Getty The Seahawks did not attend Colin Kaepernicks workout as the team originally planned.

Seattle Seahawks head coach Pete Carroll addressed questions about Colin Kapernick’s workout during his weekly press conference and revealed his thoughts on the former 49ers quarterback. Carroll noted the Seahawks originally planned to attend Kaepernick’s workout at the Falcons facility but were not able to once it was moved. The Seahawks coach admitted the team was “disappointed” with the way things played out.

“Disappointed, we had planned to be at that workout,” Carroll noted in his press conference. “It got changed around, we couldn’t hang with it. Unfortunately, we sent somebody but we couldn’t stay with the changes that happened. We missed it. We were real curious. I was real curious to see how the workout went. Just competing as always, you know.”

When asked about the video footage of Kaepernick’s workout, Carroll confirmed that the team received it, and the coach has already watched some of it. The Seahawks coach noted that one of the team’s personnel staff had been sent to Atlanta for the workout, but was not able to adjust to the revised schedule.

“Yeah, we’re looking at everything, always. I’ve seen some of it [Kaepernick’s workout video], so far. The time frame when we got the heads up we couldn’t get it pulled together [to attend]. We wanted to.”

The Seahawks were not the only team that did not attend Kaepernick’s workout after the schedule and location was adjusted. According to ESPN, only eight of the 25 teams initially expected to attend made it to Riverdale for the revised workout. Riverdale is about an hour’s drive from Flowery Branch where the Falcons’ facility is located. After the workout, Kaepernick’s agent admitted he was not optimistic about his client’s chances of signing with a team this season.

“I hope so [Kaepernick will sign with an NFL team], but I don’t know,” Nalley told ESPN. “I’ll be honest, I’m a little bit pessimistic because I’ve talked to all 32 teams. I’ve reached out to them recently, and none of them have had any interest. I’ll tell you this: No team asked for this workout. The league office asked for this workout.”

The Seahawks Hosted Kaepernick for a Visit in 2017

The Seahawks are the only team that has hosted Kaepernick for a visit to their facility during his free agency, per Pro Football Talk. Seattle brought in Kaepernick for a workout back in 2017 but ultimately decided not to sign the quarterback. After the workout, Carroll noted that Kaepernick was a starting quarterback and the team already had their QB1 in Russell Wilson.

“Colin has been a fantastic football player and he’s going to continue to be,” Carroll said after the 2017 workout, per Kiro 7 Seattle. “At this time, we didn’t do anything with it, but we know where he is and who he is, and we had a chance to understand him much more so. He’s a starter in this league. We have a starter, but he’s a starter in this league and I can’t imagine that somebody won’t give him a chance to play.”

It remains to be seen if the Seahawks will do anything with Kaepernick’s workout film, but Carroll did not sound like anything was imminent. 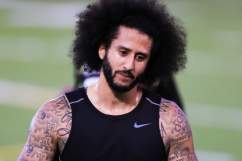