Getty Justin Fields is one of the top prospects ahead of the 2021 NFL draft.

Justin Fields is not only battling Trevor Lawrence for a trip to the national championship but is also looking to chase down the Clemson star to be the first quarterback selected in the 2021 NFL draft. Fields has narrowed the gap Lawrence had on the field after last season’s championship run at Clemson.

Like Lawrence, Fields is not eligible to enter the NFL draft until 2021 when he will be three years removed from his high school graduation. The Athletic’s Dane Brugler noted that he expects the battle for the top 2021 quarterback will be a close race.

“Hard to say [who will be selected first] because I haven’t studied them closely just yet,” Brugler noted during a Q & A session on The Athletic. “Doesn’t take much to see how talented they are, which will make it tough to split hairs.”

Sports Illustrated’s Albert Breer reported that Fields still has a chance to be selected with the top pick in 2021.

Clemson’s Trevor Lawrence may have competition from Ohio State’s Justin Fields, based on how Fields is playing, to be the first pick in 2021. I’d still [say] Lawrence is a heavy favorite, but that this is even a discussion is a huge [compliment] to Fields.

Fields started his college career at Georgia but was not able to beat out Jake Fromm for the starting job. He played sparingly while he was with the Bulldogs before transferring to Ohio State.

Fields put up stellar numbers in his first season with the Buckeyes. Heading into the College Football Playoff, Fields has thrown for 2,953 yards, 40 touchdowns and just one interception while completing 67.5 percent of his passes. He has also rushed for 471 yards and 10 touchdowns.

Walter Football’s early 2021 NFL mock draft has Fields being selected by the Broncos with the No. 2 pick just after Lawrence. Bleacher Report’s Matt Miller noted earlier this season that Lawrence is still the favorite to be the top signal-caller selected in 2021, but Fields is in the conversation.

Lawrence could still turn out to be the first pick in 2021 and a player some team (cough, cough, Miami Dolphins) will mortgage its future for, but the moral of the story is to let the process play out. By April, we could also be talking about Ohio State’s Justin Fields or whomever Oklahoma head coach Lincoln Riley has turned into a top-tier pro prospect. But for the time being, Lawrence is still viewed as a prized prospect, no matter what his touchdown-to-interception ratio says after three games.

Fields has made no secret that his decision to transfer to Ohio State was tied to his NFL draft stock. Fields noted that he believed playing under Ryan Day would help him when he heads to the next level.

“Coach Day, he’s been in the NFL,”Fields told ESPN after he transferred. “He knows what it takes to get quarterbacks to the NFL…I was just worried about the best place to develop me for the next level. That’s the main thing I was looking for.”

So far, Fields is off to a great start in Columbus, and it will be interesting to see how he follows up a nearly flawless first season with the Buckeyes. Just like they were coming out of high school, Fields and Lawrence will continue to be linked together as the 2021 NFL draft approaches. 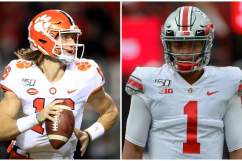