The NFL has a way of humbling you as some of the teams at the top of our power rankings found out. The Patriots entered Week 17 with a first-round bye and left with a ticket to Wild Card Weekend.

Miami came away with an upset victory over New England which moved the Patriots down to the No. 3 seed in the AFC. The loss also moved the Chiefs up to the No. 2 spot thanks to the Patriots’ misfortune.

No one wants to be the person that pronounces the Patriots dead before it is their time. We’ve already seen the Patriots get up from the grave several times during their dynasty run. Yet, there will eventually be a time when the Patriots run will come to an end, and it is reasonable to wonder if the team is in decline.

Even if they are not the Patriots of old, they are still the No. 3 seed and as long as Bill Belichick and Tom Brady are teaming up they have to be taken seriously in the postseason. That said, the Titans should give them all they can handle in the Wild Card matchup.

Over the years, the 49ers have had a difficult time matching up with the Seahawks, especially in Seattle. Just when it looked like the Seahawks would pull off a comeback victory, the Niners stopped Seattle an inch short of the goal line. The inch was the difference between the No. 1 seed in the NFC and playing on the road in the opening weekend.

The Saints and Packers both took care of business in Week 17. New Orleans will be playing on Wild Card Weekend since they lost the tiebreaker to both San Francisco and Green Bay. The Saints take on the Vikings in a rematch of an epic 2018 playoff game.

Several of the teams at the top of the standings ended up resting their starters, including the Ravens. Baltimore still managed to get a win over Pittsburgh, and Lamar Jackson looks much more poised to do damage heading into his second postseason.

Bottom 5: The Countdown to Joe Burrow Has Begun

There were likely plenty of Bengals fans tuned into the College Football Playoff as Joe Burrow shattered all kinds of records in LSU’s blowout win over Oklahoma. It will be a few months before Cincinnati can make it official, but it would be a big surprise if the Bengals did not select Burrow with the top pick.

The Redskins secured the No. 2 pick thanks to their blowout loss to the Cowboys. This means Ohio State pass rusher Chase Young is likely headed to Washington. The Lions will have the No. 3 selection where the draft will begin to get interesting.

Here is a look at our final NFL power rankings of the season. 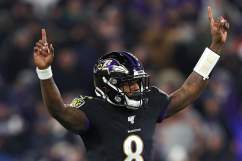