Getty Ohio State is headed to the College Football Playoff.

Ohio State takes on Clemson in a major Fiesta Bowl matchup. Clemson is favored by two points in the opening spread and the over-under is set at 63 points, per OddsShark. Clemson is second in the championship odds at +185 slightly behind LSU. Clemson opens as a favorite over Ohio State despite being ranked behind the Buckeyes by the committee.

OddsShark provided hypothetical playoff matchup odds heading into the conference title games. Ohio State was listed as a 2.5 point favorite over Clemson. The Buckeyes were a massive 12-point favorite in a potential matchup with Oklahoma.

The Buckeyes have been solid in Vegas going 9-4 against the spread this season, per OddsShark. Ohio State’s games have slightly trended towards the over with seven games topping the point total, while six games hit the under.

Ohio State & Clemson Both Put Their Undefeated Records on the Line

Clemson has dealt with sizable point spreads the entire season as the defending champions. The Tigers are 10-3 against the spread this season and the point total has trended towards the under. Seven of Clemson’s games went under the total, while six of their matchups hit the over.

Since transferring from Georgia, Justin Fields has the Ohio State offense playing as one of the top units in the country. The Buckeyes are No. 1 in college football in average points scoring 48.7 per game. This number has gone down in recent games as Ohio State is averaging 39.3 points in their last three contests.

The big question heading into the College Football Playoff is the health of Justin Fields. The Ohio State quarterback sustained a sprained ligament in his knee during the Buckeyes rivalry matchup against Michigan. Fields did not look to be at full strength in the Big Ten title game, but will get a little more than two weeks to recover.

“That made us stronger, just going through that little stumble, that helped the team gain confidence,” Fields told ESPN. “It definitely put us in a situation we’ve never been in before. The way we prepare and the way we get ready for things, it just helps us a lot. Going out there with confidence is the biggest thing. If you know in your mind that you’re going to come back and play your game, that was the biggest part in that comeback.”

Clemson enters the postseason with plenty of championship experience. Trevor Lawrence led the Tigers to a national title during his freshman season. After a slow start, Lawrence has Clemson’s offense back among the top units in the country. Clemson ranks No. 4 in the nation averaging 45.5 points per game this season and more than 50 points in their last three contests.

Ohio State remained unbeaten but looked vulnerable during the last month of the season. Fields’ knee is a concern, and the Buckeyes face a Clemson team that is playing its best football. Lawrence has a bevy of receivers to choose from and Clemson’s defense is going to provide Ohio State’s offense with their toughest challenge yet. We like Clemson to head to New Orleans to once again play for a national championship. 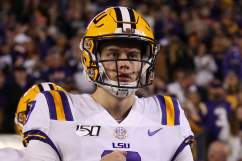