Getty Jaron Brown is dealing with an MCL injury.

The Seattle Seahawks injuries are continuing to add up as wide receiver Jaron Brown sustained an MCL injury against the 49ers in the regular-season finale. NFL Network’s Tom Pelissero reported that Brown’s status for the Seahawks’ playoff matchup against the Eagles is in doubt.

Brown is just the latest player to go down on a banged-up offensive unit. Seattle lost Chris Carson and C.J. Prosise in Week 16 against the Cardinals. Tackle Duane Brown continues to be sidelined with a knee injury, while running back Rashaad Penny along with center Justin Britt were previously lost for this season.

Seahawks linebacker Mychal Kendricks also sustained a knee injury against San Francisco, and it is unclear if he will be able to return for the playoffs. ESPN’s Brady Henderson detailed Pete Carroll’s brief updates on both players during his weekly radio show.

“Pete Carroll tells @710ESPNSeattle that the Seahawks haven’t seen the test results on Mychal Kendricks, so no update on Kendricks or Jaron Brown. Carroll said postgame they both suffered knee sprains. He said Quandre Diggs should [be] back this week,” Henderson noted on Twitter.

While the Seahawks have not released the test results, the team fears Kendricks tore his ACL against the 49ers which would end his season as NFL Network’s Ian Rapoport reported.

“Sources: #Seahawks LB Mychal Kendricks is believed to have torn his ACL. He’ll have an MRI to confirm, but a huge loss for Seattle as they march on into the playoffs,” Rapoport tweeted.

There was a bit of good news after the Seahawks’ close loss to the Niners. Carroll noted that the team expects safety Quandre Diggs back for their upcoming playoff game against the Eagles as long as he makes it through this week’s practices. The Seahawks traded for Diggs earlier this season, and the safety made an immediate impact for the team before getting injured.

“They’re telling me now today that he’s going to be ready to go this week,” Carroll said, per USA Today. “I’m being told by the trainers already that they think he can go. So we’ll see. He still has to make it through the week.”

Prior to Week 17, the Seahawks turned to two familiar faces, Marshawn Lynch and Robert Turbin, to add depth at running back. As mentioned earlier, the Seahawks lost their top three backs for the season with injuries.

The Seahawks will travel to Philadelphia to take on the Eagles on Sunday as the last NFL playoff game of Wild Card weekend. Seattle did get a bit of a boost in Week 17 when top cornerback Shaquill Griffin and pass rusher Jadeveon Clowney were able to return after missing Week 16. 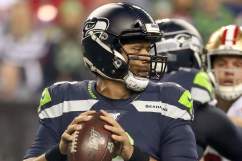