Arthur Blank, Atlanta Falcons owner, may have accidentally revealed who the Falcons will play against on their trip to London.

Blank told TalkSport.com over the weekend that from what he has heard, the Falcons will face the Denver Broncos in London:

“The NFL has had great experiences in London,” Blank said over the weekend, via TalkSport.com. “Every game has sold out, the fans are full of energy — no matter who’s playing there — facilities are outstanding, so I really couldn’t be happier that we’re going back. We had a weird ending to the last game, we lost on the last play of the last game against the Lions, but we’re still looking forward to coming back. I think we’re playing against the Broncos, I think, from what I’ve heard, I’m not sure, so we’ll see. But we’re excited about it.”

The NFL will not be releasing the 2020 regular season schedule until this spring, but there have already been a few clues as to what the upcoming season will look like.

Teams that are not in the NFC South include: Detroit Lions, Seattle Seahawks, Chicago Bears, Denver Broncos, and Oakland Raiders.

It’s not a definite answer, but Blank wouldn’t just say it to say it. It’s been a decade since the Broncos have been to England. In October of their 2010 season they played in England against the 49ers where they loss 24-16.

This will be Atlanta’s third time playing a regular season game in another country, second time in London.

Back in 2013, the Falcons and Bills played each other in Toronto. The Falcons barely won the game in overtime when Matt Bryant kicked a 36-yard field goal with only three minutes left on the clock.

The Falcons played Detroit in London during their 2014 season. This game was crazy, but nonetheless not a surprise when Atlanta crumbled. With eight minutes left in the third quarter, the Falcons led the game 21-0 then let the Lions score 22 points. The Lions won 22-21. 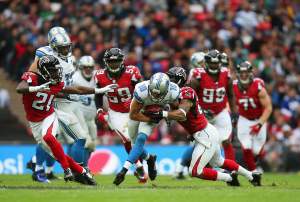 gettyLONDON, ENGLAND – 2014: Corey Fuller #10 of the Detroit Lions is tackled by Josh Wilson #26 of the Atlanta Falcons.

Jacksonville Jaguars will be playing two games in London for the 2020 season back-to-back. This year, the Jags will not play the Bears or Steelers. That leaves the Colts, Titans, Lions, Dolphins, Browns and Texans who will take on the Jags in England.

However, we can cancel out the Dolphins because they announced that they will be hosting an international game in Mexico City or London.

Last season, the NFL played four games in London. Jacksonville will play twice in London, and Atlanta will play too leaving one more team to play abroad. Also, there will be a game hosted in Mexico City which leaves yet a mother mystery team to be determined.

The international games is a fun way to bring the game of American football abroad and give those in other countries a chance to watch a live game and let them decide if football or fútbol is better.