Erin Andrews is happily married to husband Jarret Stoll as the two bonded over a love of sports. Stoll is a longtime NHL player notching 13 seasons in the league playing for the Oilers, Kings, Rangers and Wild over his career.

Stoll last played in the NHL in 2016 and married Andrews the following year. The couple’s wedding took place in 2017 in Big Sky, Montana in a private neighborhood overlooking the mountains, per Harpers Bazar. They released a statement to Bazar describing the meaningful setting for their big day.

The whole thing felt so intimate. Yifat transformed the club’s helipad into a wildflower field. The mountains were the backdrop—there was no need to upstage nature. Yifat and her team left an old, rustic wooden fence at the perimeter of the setting, which made it all feel so rustic. There was an E+J monogrammed flag where the helipad wind socks were originally flying, and the flag flailed in the wind as guests were dropped off for the ceremony.

Happy Birthday and Happy Anniversary @stolly28! June 24th is my one of my favorite days for so many reasons!! Love you ❤️❤️

Stoll met Andrews through their mutual friend Michael Strahan, although the former NFL pass rusher was initially unsuccessful in persuading Andrews to go on a date with Stoll.

“Can you set me up with Erin Andrews?” Stoll texted Strahan, per Bazar.

Strahan did his part by texting Andrews that his friend would like to take her out for dinner. Andrews declined as she was covering the World Series, and did not want to do anything while she was working busy hours.

Stoll took matters into his own hands by sneaking down to the dugout during the 2012 World Series to formally introduce himself to Andrews, and she admired his persistence along with his ability to get past security. Andrews changed her mind and decided to give Stoll a chance at that date.

Andrews is working the Super Bowl which means there is a good chance she will be reunited with 49ers quarterback Jimmy Garoppolo. The two shared an awkward moment earlier in the 2019 NFL season after Garoppolo appeared to call Andrews “baby” during a postgame interview. Andrews asked Garoppolo how it felt to continue their winning streak.

“It feels good, baby!” Garoppolo responded to Andrews in the interview.

Garoppolo was using the phrase to emphasize the win, but fans misconstrued it as the quarterback making an advance towards Andrews. The Niners quarterback admitted that he was surprised that the video went viral.

Andrews later came to the defense of Garoppolo and noted she understood what he was saying despite the outcry.

Andrews was diagnosed with cervical cancer in 2016 but was able to make a full recovery. The reporter admitted that the cancer diagnosis sped up their discussion about marriage. Andrews opened up about the cancer diagnosis’ impact on her relationship with Stoll in an interview with Health.com.

We hadn’t even been discussing marriage. We hadn’t discussed babies! It really puts things on the fast track for you—because you have an oncologist saying to you, ‘We highly recommend that you guys do your embryos right now, freeze them.’ I’m like, ‘Hi, hon. I love you. I hope we’re spending our lives together.’ And he was amazing. 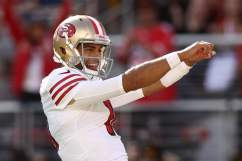