Getty Greg Olsen is signing with the Seattle Seahawks.

Greg Olsen is signing with the Seattle Seahawks after narrowing his list of NFL teams down to three. Olsen signed a one-year, $7 million contract with the Seahawks making 2020 a prove-it season for the former Pro Bowl tight end.

“Former Panthers’ TE Greg Olsen is signing a one-year, $7 million deal that includes $5.5M [guaranteed] with the Seahawks, per source. Olsen visited and negotiated with Buffalo, Seattle and Washington but felt most comfortable with the Seahawks,” Schefter tweeted.

Olsen not only selected the Seahawks over the Redskins and Bills but the tight end also had television opportunities as well. Olsen is currently part of Fox’s broadcast team for XFL games. It was the “lure of playing with Russell Wilson” that landed the former Panthers star in the Pacific Northwest. Olsen’s former coach Ron Rivera is the new head man with the Redskins, but the upside of the Seahawks was too much to turn down.

“Greg Olsen really liked Buffalo and Washington, and strongly considered both. But the lure of playing with Russell Wilson in Seattle was just too strong. Olsen takes a 1-year, $7 million deal with the Seahawks,” Schefter tweeted.

Olsen reportedly met with the Seahawks, Bills and Redskins last week. Wilson had been publicly recruiting Olsen on social media and the two were seen together at NFL Honors.

The Seahawks were looking to add depth at tight end as Will Dissly continues to recover from a season-ending Achilles’ injury. Seattle is one of the teams with the most cap space this offseason, so this is just the first move in what is expected to be a busy free agency for the Seahawks. As The News Tribune’s Gregg Bell points out, Olsen falls in line with the sort of affordable deals the Seahawks have a history of making with veterans.

Seahawks head coach Pete Carroll provided a positive update on Dissly during his final press conference of the season. Carroll also admitted that Dissly had some “tough work” remaining in the days ahead with his rehab.

“He’s killing the rehab,” Carroll noted, per Seahawks.com. “Will is doing great. He’s spending some time down in LA to get right, and he’s really fired up about the people that he’s working with and the progress he’s making. He’s been around a lot. He’ll get it done. Will will get it done. There’s no question he will. But, it’s a long process, it’s going to be some tough work for him.”

The Olsen signing still gives the Seahawks plenty of cap space to make additional moves when free agency officially begins in March. The Seahawks could also look to improve their pass rush, secondary and offensive line during the offseason. Olsen was recently released by the Panthers opening up an early window for the tight end to sign with a new team. 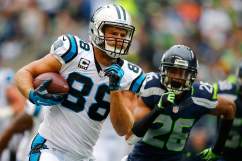 Read More
Football, NFL, Seattle Seahawks
Greg Olsen has made his decision on where he will play football in 2020. Find out why Olsen selected the Seahawks over the Bills and Redskins.