Getty Head coach Andy Reid of the Kansas City Chiefs looks on from the sidelines. (Photo by Jamie Squire/Getty Images)

It all started back in 1982, when a young Andy Reid served as a graduate assistant at his college alma mater, Brigham Young University. Reid played alongside former Chicago Bears quarterback Jim McMahon at BYU from 1978-1980, and began coaching nearly as soon as his college playing days were over.

Reid has been coaching for nearly 40 years now, and he has vast experience coaching at both the collegiate and the professional levels. He has yet to win it all as a head coach, however, and when his Kansas City Chiefs take on the San Francisco 49ers in Super Bowl LIV, he’ll get another shot. Here’s a look at Andy Reid’s coaching history, from the early ’80s up until now.

After his gig as a grad assistant at BYU, Reid moved on to San Francisco State University, where he was the offensive line coach from 1983-85. Reid’s specialty remained the offensive line; in 1986, he coached the o-line at Northern Arizona before moving on to UTEP, where he stayed in the same role from 1987-88.

In 1989, Reid headed to Missouri, where he coached the offensive line from 1989-1991, before he moved on to the NFL. Reid spent nine years as an offensive line coach, and he became the first man to land a head coaching position without having prior experience as an offensive or defensive coordinator first.

Movin’ On Up: The Packers and Eagles Years 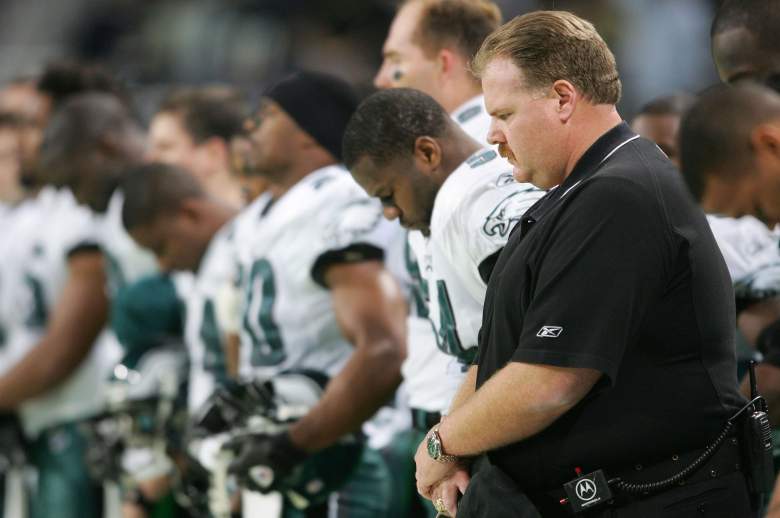 Andy Reid as head coach of the Philadelphia Eagles in 2004. (Photo by Elsa/Getty Images)

In 1992, Reid headed to America’s Dairyland, taking a position as offensive assistant for the Green Bay Packers, a job he held until 1994, when he became the assistant offensive line and tight ends coach.

Reid became quarterbacks coach and assistant head coach 1997, when Marty Mornhinweg left to be the offensive coordinator for Steve Mariucci with the San Francisco 49ers. Mariucci wanted to make Reid his offensive coordinator with the Niners, but was prevented from doing so by then-head coach Mike Holmgren. Reid won a Super Bowl under Holmgren, working with Hall of Fame quarterback Brett Favre in his time in Green Bay.

In 1999, Reid got his first head coaching gig with the Eagles. His first course of action was drafting quarterback Donovan McNabb with the second overall pick in the 1999 NFL Draft. From 2000-2004, his Eagles boasted a winning record, winning three-straight NFC East championships in that time. He took Philly to the Super Bowl after an excellent 2004 campaign, but lost to the Patriots, 24-21. Reid was with the Eagles until 2012, when the team decided not to renew his contract after a 4-12 season.

Reid took over as head coach of the Chiefs the following year, and he has enjoyed a great deal of success in Kansas City ever since. He is 77-35 as head coach with the Chiefs, and has a 207-128 career record. Reid lost the AFC Championship to New England last year, but finally got over the hump this season, reaching his first Super Bowl with Kansas City.

Reid has yet to have a losing season as Chiefs head coach. His worst season was in 2014, when the team went 9-7. That remains the only year the team has failed to make the playoffs in his tenure.

READ NEXT: Why Super Bowl LIV Will Be Incredibly Special for Chiefs Matriarch Norma Hunt