Pete Carroll has heard Russell Wilson’s request to add more tempo to the offense and offered his first response at the NFL Combine. Carroll noted it is part of an ongoing conversation he has had with the Seahawks’ quarterback but remained non-committal on what fans will next season with the offense.

“We’ve been talking about that for years,” Carroll said, per NBC Sports Northwest. “We’ve been in and out of tempo throughout, and so you’ll see what happens.”

Prior to the Super Bowl, Wilson noted to Pro Football Talk that he noticed the two-minute offense seemed to perform better than it did at other points in the game. Wilson admitted he would like to see more tempo in the Seahawks offense when the team returns to the field next season.

“I mean we’ve always been really good at two-minute [offense],” Wilson told Pro Football Talk prior to the Super Bowl. “We’ve always been really good in those end of the half, those not always hurry-up situations, but those up-tempo situations [and] moments. And the reality is this: I think the defense gets tired, first thing. And I think the second thing is that, you know, I really know kind of what I want to get after them, how we want to get after them, especially in those moments. And guys just make plays in those moments. I think the freedom of just going after it and just scoring as many points, you know?”

Carroll did not promise major changes to the offense, but he noted the front office along with the coaching staff is evaluating everything to try to improve the team. Carroll described the offseason as a “cool time” for coaches to make changes.

“There’s a ton of stuff,” Carroll said, per Seahawks.com. “The process now, it’s a really exciting time for us, because it’s really the creative time of it, the creative side of evaluations, the assessment of our players, who we can add, how we can fit things together, how we can take advantage of things we learned last year, things we don’t want to do. It’s just ongoing. Then structuring the information that we gather and put it into motion, how we’re going to use April and May to develop and find out what things work for us and how we can grow. It’s a very dynamic process, and it’s a really cool time for us as coaches. It’s just a million miles different than what it is during the season. Even once we start getting on the field and all, it’s just not the same; it’s a different mentality. So we’re trying to tweak and turn things and kind of be the master scientist, chemist back there behind it all. It’s an exciting time.”

It is a challenge given Wilson has implied he wants the offense to open up next season. The Seahawks have primarily been a run-first offense under Carroll, but the team struggled down the stretch to have scoring drives. It will be worth watching how Carroll adapts his preferred playing style to complement having one of the top quarterbacks in the NFL.

Carroll Hinted at the Use of More No-Huddle Next Season

Often in coaches’ press conferences, there is what is said and what is implied. While Carroll stopped short of making promises, The News Tribune’s Gregg Bell noted that Carroll hinted at the use of more no-huddle next season.

“Pete Carroll says he, Russell Wilson have talked ‘for years’ about playing more up-tempo. ‘We’ve been in and out of tempo throughout. So, you’ll see what happens.’ A hint more no-huddle that Wilson loves and excels in this coming season. But we’ve heard that before #Seahawks,” Bell noted on Twitter.

Wilson has been vocal this offseason about what he wants to see happen in Seattle, including pushing for the Seahawks to add “superstars” in free agency. The Seahawks’ quarterback has also been open about the changes he would like to see to the Seahawks’ offense. It will be interesting to see how many of Wilson’s requests the Seahawks make happen. 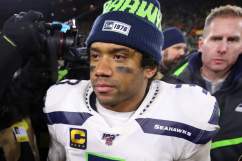