Getty Nick Mullens #4 of the San Francisco 49ers is the subject of trade rumors.

After making it to the Super Bowl this season, the San Francisco 49ers do not want to regress. Kyle Shanahan’s squad lost the big game to Patrick Mahomes and the Kansas City Chiefs, but the road back to football’s main event is filled with numerous bumps and pitfalls.

As The Ringer’s Robert Mays notes, only one team — the mighty New England Patriots — has lost the Super Bowl only to return to win it the following season, which was back in 2016 and 2017. The Seattle Seahawks are the only other squad in that time frame to head to back-to-back Super Bowls, so a return trip to the Super Bowl for San Francisco, while possible, is statistically unlikely.

The 49ers also don’t have a great deal of cap room heading into this season. According to Spotrac, the Niners have over $14 million in cap space to work with, which is in the bottom half of the league. Additionally, San Francisco has just one pick in the first four rounds of the NFL Draft this year. Thus, if general manager John Lynch doesn’t make a few smart moves this offseason, it could be difficult to maintain current success, much less improve.

With this in mind, some members of sports media have suggested the 49ers may make a few trades in 2020. One name frequently discussed in trade rumors? Backup quarterback Nick Mullens. 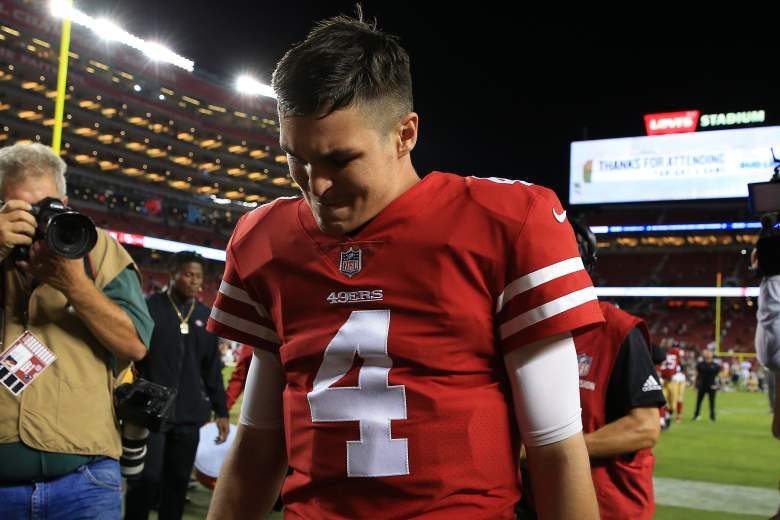 49ers quarterback Nick Mullens could be wearing another uniform next season.

According to Kyle Posey of SB Nation, there is still a solid trade market for Mullens. Mullens is an exclusive rights free agent (ERFA) this year, which means the 49ers are the only team that will be able to negotiate with him. Per Over the Cap, the tender offer “is only a one year non-guaranteed contract at the minimum salary level.”

Posey thinks Mullens could gain interest from several quarterback-strapped teams, and if another team offers the 49ers a 4th or 5th round pick for him, San Francisco will likely take that deal. Mullens will also come relatively cheap, which is an attractive quality. He signed a two-year contract in 2018 for just over $1 million, and while he will likely make more in 2020, he should still be a bargain for most teams looking to add depth to their quarterback rooms.

Mullens started eight games in relief of an injured Jimmy Garoppolo in 2018, and he played relatively well when he had his opportunity. He went 176-274 for 2,277 yards, 13 touchdowns and 10 interceptions, with a 90.8 rating.