Getty XFL players make quite a bit less than those in the NFL.

The majority of XFL players’ salaries are not close to the minimum NFL contract with a few exceptions. Pro Football Talk reported the average XFL salary is $55,000, much less than last season’s minimum NFL salary of $495,000.

“Each roster will have roughly 25 people on the football side and 25 people on the business side,” Luck noted, per XFL Newsroom. “Salary for coaches will be around $500,000 and salary for the top players around $250,000. Players will also be drug tested for performance-enhancing substances.”

XFL Players Are Paid a Base Salary, Roster Bonus & Another Bonus for Each Win

XFL contracts are structured so players can earn money in three primary ways: base salary, active roster bonus and a bonus for wins. Players are guaranteed money with their base salary but can earn bonuses for wins as well as being part of the active roster each week. Yahoo Sports detailed the XFL’s salary structure for the average player which centers around a base pay of $2,080 every two weeks.

Players will earn an additional $1,685 for each game they’re active – each of the league’s eight teams will have 52-player roster, but only 46 will be active for games – meaning a starter will make another $16,850.

The XFL has shied away from the developmental league label, something the AAF leaned into but failed to make it through its inaugural season. That said, for many of the XFL players the league is an opportunity to either get back into the NFL, or get their first opportunity to make it onto one of the 32 teams’ rosters. XFL players are not permitted to sign with a team during the season, but every contract allows for them to join an NFL team after the championship game.

“Once you’re under contract with the XFL, you’re under contract, regardless of position,” Luck explained to Tampa Bay Times. “We’re not trying to be a development league for the NFL. That’s not our raison d’être. Having said that, I hope that every one of the Vipers players has a chance to go to the NFL after our season because that means we’ve done our job in terms of playing good football. Bust your butt, play hard, have a chance to get great game tape and you’ll get a shot in the NFL. We are a league of opportunity.” 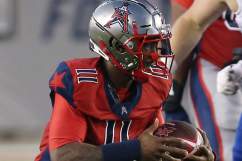 P.J. Walker’s Salary: How Much Money Is XFL QB Making in Contract?