Seahawks running back Marshawn Lynch was selected by Princeton seniors to speak at Class Day which takes place a day before the school’s commencement ceremony. Not all Princeton students are happy with Lynch being selected as a group of seniors wrote an op-ed letter to the Class Day co-chairs in the Daily Princetonian.

The letter started by criticizing the process used to select Lynch noting they “did not feel included in the process” to select the NFL rusher as the speaker. Class Day co-chair Jaylin Lugardo cited how Lynch “unapologetically embodied and advocated for our own identities and values” of the students during the school’s initial announcement.

“We wanted a Class Day speaker who unapologetically embodied and advocated for our own identities and values,” Lugardo explained, per Princeton.edu. “Being a first-generation, low-income student was the source of my greatest challenges and successes at Princeton, and it’s an identity I can’t imagine disappears after graduating. So, I’m grateful to have Marshawn Lynch, having completed his journey as a first-gen student-athlete at [Berkeley], speaking at Class Day.”

The piece published in the Daily Princetonian went on to say that they “do not mean to criticize this choice of speaker in particular” instead citing the “opaque selection process” that was used to select Lynch. Yet, just a few paragraphs later the letter pointed to Lynch’s fines for not speaking with the media as a reason for the confusion over the “criteria that led to his nomination.”

On receiving the email about the speaker announcement, members of the senior class who were not aware of Lynch tried to learn more about his identity and relevance to our Class Day ceremony. Among articles that praised his NFL career and philanthropic contributions, we came across articles discussing Lynch’s reticence with the media and his terse responses at press conferences. In 2013 and 2014, for example, Lynch was fined $50,000 and $100,000 for refusing to speak to the media. During the 2015 Superbowl Media Day, Lynch famously responded to multiple questions with variants of “I’m just here so I won’t get fined.” With no other frame of reference, such reports caused confusion over the set of criteria that led to his nomination.

The initial press release from Princeton cited a few different reasons for Lynch being selected as the speaker. The students cited Lynch’s “professional excellence” along with his work in the community as major reasons that he was a fit to talk to the students at Class Day.

“Mr. Lynch’s sustained professional excellence is not the only reason we are excited to have him serve as our Class Day speaker. His substantive work in communities stands alongside his on-field success,” the students noted in the press release. “Our goal was to invite a speaker who embodies the various experiences we have shared as a community during our Princeton tenure; someone whose professional and personal passions speak to the service-focused and intellectually rigorous interests core to the University.”

The group of students frustrated with the selection concluded their letter by calling for reform to the “nomination and selection process by clarifying the procedure” used to appoint the speaker. Lynch is scheduled to speak to the Princeton seniors on Monday, June 1. 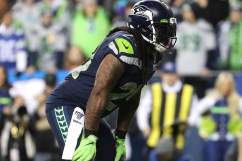