It’s finally official. The Chicago Bears officially announced on their team Twitter account that they have acquired veteran quarterback Nick Foles via trade from the Jacksonville Jaguars. The Bears sent the conditional fourth-round draft pick they received after Adrian Amos signed with the Green Bay Packers to the Jags in exchange for Foles.

We have officially acquired @NickFoles from a trade with the Jacksonville Jaguars.

Foles then responded with a Twitter post of his own, saying: “Now it’s official! Tori, Lily, Henry and I are so excited for this next chapter. See you soon, Chicago! #Beardown #9.” Foles included two photos with the post: one of him signing his new contract with the Bears, and another of himself with his wife Tori and their daughter Lily, who is clutching a stuffed a stuffed version of the team mascot, Staley the Bear.

Now it’s official! Tori, Lily, Henry and I are so excited for this next chapter. See you soon, Chicago! #BearDown #9 pic.twitter.com/ouEVUT9jub

The day prior to the official announcement, Foles appeared on former Bears’ quarterback Chase Daniel’s show, “Chase Chats,” and the two discussed just about everything but football. Tuesday marked the first time Foles addressed being a member of the Chicago Bears. But he also had a bit more to say to Bears fans, and the city of Chicago. 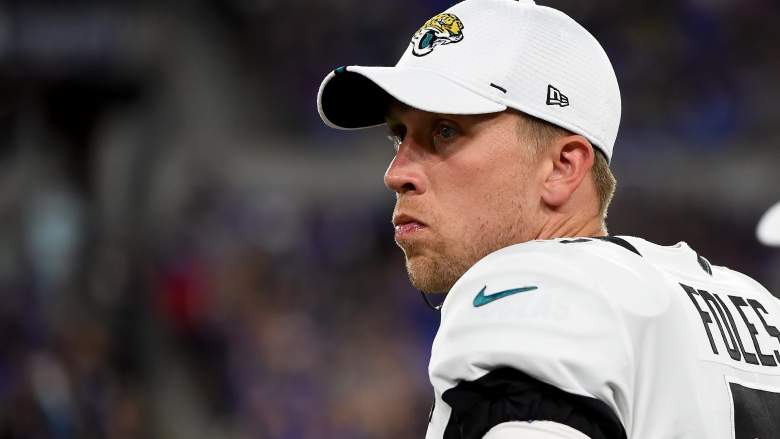 GettyNew Bears QB Nick Foles has a message for Bears fans, and for the city of Chicago — his future home.

Shortly after, the Bears also released a video of Foles, along with the caption: “Welcome to da squad.” The video message was short, yet sweet. In it, Foles addresses Chicago Bears fans for the first time, and he had a pretty touching first message for Bears fans and the entire city of Chicago.

“Hey, Bears fans, it’s Nick Foles.” he began “I just want to send a quick video and just say how honored I am to be a part of your organization and a part of your city. My family and I are looking forward to getting out there, getting to work. Until then, though, there’s a lot more pressing matters in the world right now, so our prayers are with everyone. I hope everyone is staying safe. Our love is with you, and Bear down.”

At least one current Bear took a minute to kid Foles a bit after the official announcement, however.

Bears wide receiver and special teams All-Pro Cordarrelle Patterson took to Twitter to joke with Foles a bit while also welcoming him to the team. In Foles’ first tweet, he tweeted out a hashtag with his preferred number, 9, which is also the number of current Bears backup Tyler Bray.

“Welcome to the squad, bruh,” Patterson began. “But you gotta pay my boy” — as in Tyler Bray — for number 9, he joked.

@NickFoles welcome to the squad bruh. But you gotta pay my boy @tbrayvol8 for #9 ? ⬇️

While the 2020 NFL season is still a major question mark with details that are murky at best, it seems as though Foles has gotten off to a great start in his new city, and with his new team.