Getty Tom Brady has been linked to the 49ers in NFL free agency.

The San Francisco 49ers are the latest team to be linked to Tom Brady when NFL free agency begins in just a few weeks. If the Niners are surprisingly able to land Brady, it would have an immediate impact on the Seahawks and the NFC West. The 49ers are already the team to beat inside the division after their Super Bowl run, but the Seahawks would have to face Brady at least two times during the 2020 season if he signs with San Francisco.

NBC Sports Boston’s Tom Curran noted that he believes the Niners could be a darkhorse candidate to land Brady. Curran cited ESPN’s Jeff Darlington’s report that at least eight teams are exploring the idea of signing Brady noting the 49ers are among these organizations.

“I have spoken to executives with eight different teams that are at the very least monitoring Tom Brady’s free agency,” ESPN’s Jeff Darlington said Wednesday. “They are going down this list having internal discussions right now saying, ‘Is this the right fit for our organization?’ ”

The 49ers are among the eight. They are not among the four teams that Darlington suggested would — if the opportunity presented itself — sign Brady tomorrow.

It would be unfair to call the Niners a top contender for Brady, but it is interesting to think the franchise is even remotely considering ending Jimmy Garoppolo’s short tenure in San Francisco. The 49ers would need to trade Garoppolo to the Patriots or another team for San Francisco to even have a chance at signing Brady.

For the Seahawks and other NFC West teams, it is challenging to know what to root for in this scenario. Brady would upgrade the Niners team for next season, but it seems too early to tell what San Francisco has with Garoppolo. For as good as the Niners defense was last season, it was the passing game that played a key role in the 49ers losing the Super Bowl.

Regardless of if the 49ers land Brady, all signs point to the honeymoon being over between the 49ers and Garoppolo. Curran reported that 49ers coach Kyle Shanahan has “some reservations about Garoppolo’s ceiling and overall decision making.”

This does not necessarily mean that Garoppolo’s time with San Francisco has come to an abrupt end, but there could be a bit of buyer’s remorse within the franchise. The Niners were praised for only giving up a second-round pick for Garoppolo in their trade with the Patriots, but his five-year, $137 million contract is now looming over the franchise.

Brady Grew Up in the Bay Area as a 49ers Fan

There is still time for Garoppolo to develop as a franchise quarterback as Jimmy G has only had one full season as an NFL starter. The Brady rumors ring a little truer given he grew up in the Bay Area going to 49ers games, and it makes sense that he would have at least some interest in a return home.

The bigger news item out of the Brady rumors is that the 49ers do not have complete confidence in their offense heading into next season. Shanahan is considered to be one of the best offensive minds in football, and it is a bad sign if Garoppolo is unable to take the next step forward as a quarterback in the coming seasons.

Introducing Brady to the fierce Seahawks-Niners rivalry admittedly feels a bit odd. From Richard Sherman to Super Bowl XLIX, Brady already has a lengthy history with the Seahawks. 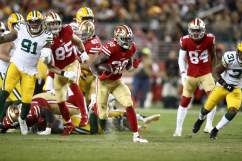