He’s at it again. Chicago Bears wide receiver Allen Robinson is recruiting players on Twitter, which is something he is no stranger to. Robinson recently suggested safety Eric Berry come to Chicago, and last season, he also recruited former Jags wideout Allen Hurns.

First, Robinson tweeted out a photo of an announcement that the Jacksonville Jaguars are releasing veteran wide receiver Marqise Lee. Robinson tagged the Bears’ team Twitter account, along with some eyeball emojis, deliberately drawing attention to Lee’s newly available status.

Then, Robinson retweeted a fan who tagged him in a post speaking of reuniting him with his former teammate. A fan on Twitter asked Robinson: “Should daBears reunite Marquis [sic] Lee with Allen Robinson?” Robinson responded by retweeting it.

It’s obvious Robinson wouldn’t mind being reunited with Lee; they spent four seasons as teammates in Jacksonville from 2014-2017. But would Lee be a solid replacement for the recently-departed Taylor Gabriel? 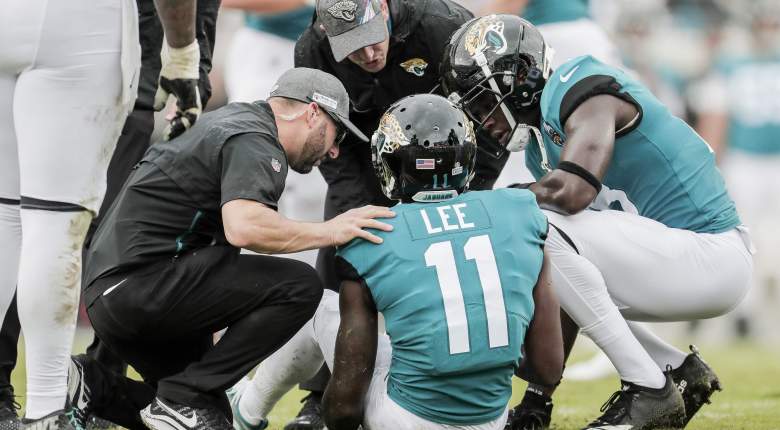 GettyJACKSONVILLE, FLORIDA – OCTOBER 27: Marqise Lee of the Jacksonville Jaguars is tended to by the Jaguars training staff after suffering an injury during the second quarter of a game against the New York Jets at TIAA Bank Field on October 27, 2019 in Jacksonville, Florida. (Photo by James Gilbert/Getty Images)

Prior to the 2018 season, Lee was relatively injury-free. He started 29 games from 2014-2017, while playing in 53. In that time, he racked up 171 catches for just over 2,100 yards and eight touchdowns. Things took a turn for Lee in 2018, when he suffered ACL, MCL and PCL tears in his left knee. He followed that up with a trip to the injured reserve list last season when a shoulder injury took him out.

The best season of Lee’s career came alongside Robinson. In 2016, Lee caught 63 passes for 851 yards and three scores, and he had a solid showing the following year. Lee snagged 56 balls for 702 yards and three touchdowns in 2017, but has failed to make an impact since due to injury.

Considering his injury history, there’s little doubt Lee will come at a reasonable cost. He turns 29 in November (he’s basically nine months younger than Taylor Gabriel), and he would be a great fit in Matt Nagy’s offense. He brings a bigger body than Gabriel did — Lee is 6’0″ and is just a tad slower — but he can essentially fill the same role, IF he’s healthy. And that’s the key.

Robinson, who tore his ACL in Jacksonville’s first game of the 2017 season, signed with the Bears the following year. He has recovered in an impressive fashion, becoming Chicago’s best offensive player, catching 153 passes for 1,901 yards and 11 touchdowns in his two seasons with the team.

Robinson recently told Jim Rome the injury helped him grow as a player. “I’m very grateful for suffering that, because I think it took me to a standpoint mentally that I don’t know if I would be at right now if I didn’t have that injury. I think it challenged me in a lot of different ways I hadn’t been challenged before.”

Perhaps Robinson, based on what he knows about Lee, feels his former Jags teammate will be able to overcome his injuries in a similar fashion. Perhaps he’d just like to play with his friend again. Either way, if Lee is good to go physically, he would be an intriguing piece for Chicago to add.