Matt Nagy is doing things quite a bit differently in 2020 than he did in his two previous seasons. While every team in the NFL has been forced to have one of the more unusual offseasons in history due to the coronavirus pandemic, Nagy and the Chicago Bears also have a quarterback competition on their plate for the upcoming season.

Sports Illustrated’s Albert Breer spoke to Nagy over the weekend about how he and his team have been navigating through these unchartered waters, how they are handling the competition between Nick Foles and Mitchell Trubisky and what they’re doing differently this year to avoid making last year’s mistakes.

Nagy Has Been Incorporating Guest Speakers

Nagy told Breer that due to the virtual nature of team meetings and communications, he felt it was the perfect time to utilize former NFL stars as guest speakers. Some have spoken to the team as a unit, while others have talked to position groups, where they have detailed conversations about plays, experience, and anything else they deem appropriate. Nagy says his players have been having detailed discussions with former pros where they ask questions and have genuine conversations and exchanges.

And it has gotten quite in depth. According to Breer:

“A former quarterback with a background in the offense going back a couple decades was invited into the quarterback room, and entered with the intention of breaking down a single play. He, Mitch Trubisky, Nick Foles and Tyler Bray, and Chicago’s cadre of quarterback coaches, went over footwork. They went through the progression. They talked adjustments and execution. Before they knew it, they’d spent an hour together. On a single play.”

While Nagy didn’t name names in terms of who his guest speakers have been, or which quarterback spent an hour breaking down a single play, the Bears coach is grateful to them for their perspectives, and his openness could be a good sign for the team and its fans.

“If you stay the same all the time, people will eventually catch up to you,” he said. 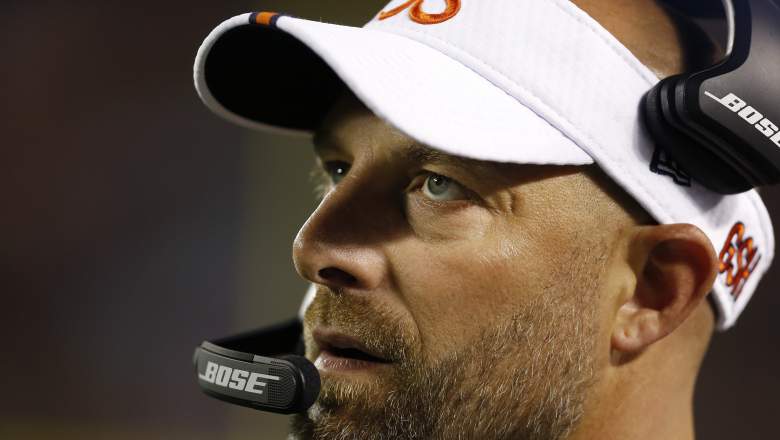 Nagy has gotten downright defiant at times when members of the media have questioned his play-calling in the past. Heading into his third season as a head coach, perhaps he’s learning how to better listen to and integrate the ideas of others. In his conversation with Breer, he seemed more open to the ideas of others while also maintaining hardcore focus on getting the basics right.

“For me, right now, forget the X’s and O’s, forget the play call and all that, I look at the word ‘details’. I think the greatest teams in all of sports are extremely detailed, and it comes naturally to them, because they do it over and over. It’s a repeated habit,” he said.

Nagy also seemed excited about ditching some of the aspects or plays of his offense that didn’t work in favor of new ones we haven’t seen yet.

“For the coaches that have been here, now going into our third year, we’ve now had the luxury of understanding our current players, what they do well, and what they don’t do well. So as a staff, we’ve seen concepts that we like, that we think are worth keeping. And concepts that, you know what, whether they were good or not in Kansas City, they’re not very good here in Chicago. So we’re gonna bag it, let’s get rid of it. That’s where we’re at right now, and we’re real excited about some of the newer ideas and thoughts we have, that these other coaches have brought.”