To call Mitchell Trubisky an underdog at this point feels like a gross understatement. After the Chicago Bears sent their 2020 fourth-round draft pick to the Jacksonville Jaguars in exchange for veteran quarterback Nick Foles and his pricey-for-a-backup contract, many have felt Trubisky’s days as the Bears’ starter are numbered.

Still, there’s a chance Trubisky answers the call, plays incredibly well, and beats out Foles. But what are the actual chances that happens? According to the latest betting odds, not very good. Like, close to the absolute worst.

Citing data from DraftKings, Pro Football Talk’s Michael David Smith broke down the betting odds for which NFL player is most likely to win Comeback Player of the Year. Both of the Bears’ current quarterbacks, Trubisky and Foles, were mentioned, but not favorably.

After un-retiring and following Tom Brady to Tampa, tight end Rob Gronkowski is the current favorite to win NFL Comeback Player of the Year. Despite not playing at all in 2020, Gronk still has the best odds to win the award at +300. Steelers quarterback Ben Roethlisberger, who has been dealing with an elbow injury, is just behind Gronk, with 4-1 odds to take home the hardware.

After breaking his collarbone in the first game of the season last year and subsequently getting beat out by rookie Gardner Minshew, the narrative surrounding Foles makes him a prime contender for the award. The same can be said for Trubisky, who had a majorly disappointing season in 2019 after showing promise in 2018. The Bears just declined to pick up Trubisky’s fifth-year option after the two quarterbacks Chicago famously passed up, Deshaun Watson and Patrick Mahomes, saw their options picked up. Put simply, things aren’t looking good for Trubisky right now. 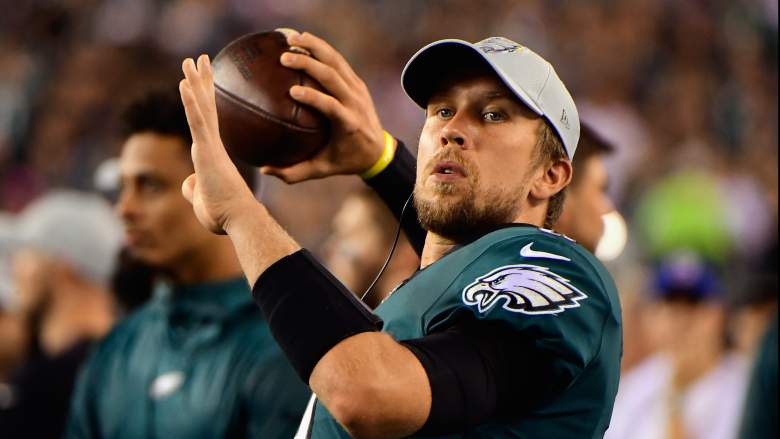 GettyNew Bears QB Nick Foles has better odds to be named the NFL’s Comeback Player of the Year in 2020 than Mitch Trubisky does — but Foles’ odds still are not good.

According to Michael David Smith, Trubisky is the biggest long shot to win the award. “The longest odds on the board belong to Mitchell Trubisky, who’s at +10,000,” he wrote. Foles has better odds to mount a mega-comeback, but his still aren’t great.

Foles has +2000 odds to win the award, which is still not good. Two people who are not even actively playing the game have the same odds as Foles: Cam Newton and Antonio Brown. Myles Garrett and Todd Gurley also sit tied with Foles at +2000. Quarterback Alex Smith, who suffered a horrific leg injury in November of 2018 and hasn’t played since then, has better odds to win the award than Foles or Trubisky. Smith, along with Matthew Stafford and J.J. Watt, currently have 7-1 odds of taking home Comeback Player of the Year. BetMGM also has Trubisky at +8,000 odds, so the fourth-year quarterback is looking like the biggest underdog in the league right now — which certainly wasn’t the case last year.

Just last summer, Trubisky was a favorite among bettors as a possible league MVP candidate. Oh, how times have changed.