The headlines were buzzing this week with the report that the Seattle Seahawks offered perennial Pro Bowl quarterback Russell Wilson to the Cleveland Browns for the No. 1 overall pick in the 2018 draft.

Chris Simms of Pro Football Talk said heard rumors from a trusted sources that Seattle had offered Wilson for the top pick, with the plan supposedly being to replace their Super Bowl winning QB with Baker Mayfield.

This was coming off a year where Wilson led the NFL in touchdown passes and made the Pro Bowl. But as we know now, the trade never happened and Seattle would go on to make Wilson the highest paid player in the NFL on his next contract, while the Browns picked Mayfield.

“I have heard a rumor from some people I trusted a few years ago that Seattle called Cleveland when they had the No. 1 pick,” Simms said. “And there was this rumor going around the NFL that they offered Russell Wilson to the Browns for the No. 1 pick the year they drafted Baker Mayfield. I never followed up, but I had people tell me that’s what they are hearing.”

When asked about the trade rumor, former Browns head coach Hue Jackson said that’s something that was never on the table. Jackson spoke on the rumor while on CBS Radio on Friday.

HJ: "I've never heard anything so crazy in my life!" @ZachGelb: "So it's not true at all?"

Former #Browns HC Hue Jackson on The Zach Gelb Show in response to @CSimmsQB saying the #Seahawks talked to the #Browns about trading @DangeRussWilson for the 2018 #1 pick. pic.twitter.com/fBrwnWpbwg

“I’ve never heard something so crazy in my life,” said Jackson, who went 3-36-1 with the Browns. “I’m sure [Former Browns GM] John [Dorsey] and [Seahawks GM] John Schneider are really tight. And I’m sure if they’re having conversations on their own and just jiving around and doing those kinds of things. I would think if something was serious about that, we — the executive team — and the organization would have known.”

At the time the Seahawks and Wilson were approaching contract talks after a stellar start to his career where he quickly established himself in the top-tier of quarterbacks. The following year Wilson went on to sign a record-setting four-year, $140 million contract extension, which included a $65 million signing bonus. 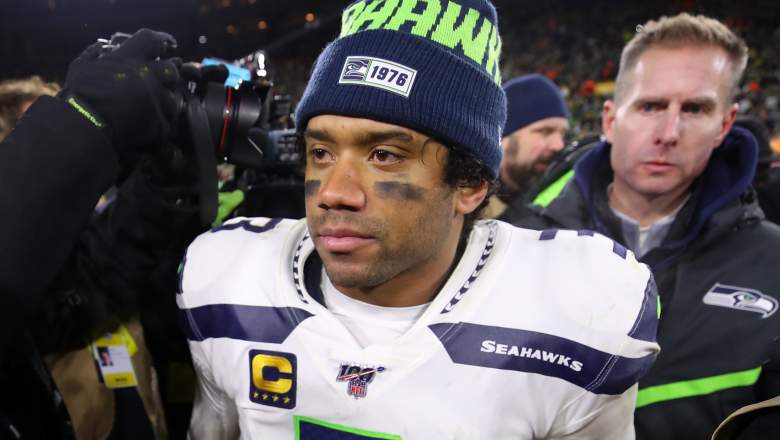 Simms took a bit of heat for dropping the rumor because it simply did not make a ton of sense to those in the know. However, his Pro Football Talk partner Mike Florio backed the claim and even added to it, saying it influenced contract talks between Wilson and Seattle.

“Per a source with knowledge of the situation, the Browns contend that the idea was ‘floated’ conceptually, but that the discussion did indeed happen,” Florio wrote. At the time, the Seahawks were staring at another extension for Wilson, one that would result a year later in a contract with a new-money value of $35 million per year. And the placement of a no-trade clause in the latest contract was indeed influenced by chatter regarding the potential trade to Cleveland, we’re told.”

Florio goes on to say that the Seahawks could eventually look to move Wilson in the future because of the massive money he is owed again the cap.