Getty Michael McCaskey and Virginia McCaskey after the Bears won the 2007 NFC Championship game against the New Orleans Saints at Soldier Field in Chicago, Illinois on January 21, 2007. McCaskey died at the age of 76 on May 16, 2020. (Photo by Al Messerschmidt/Getty Images)

Former Chicago Bears president Michael McCaskey has died at the age of 76, the team has announced. McCaskey had been battling leukemia. The son of Virginia Halas McCaskey and grandson of legendary Bears founder George “Papa Bear” Halas, McCaskey served as president of the Bears after Halas’ death in 1983 up until 1999. He was the team’s president when it won its only Super Bowl in franchise history after the legendary 1985 season.

Current Bears’ president Ted Phillips commented on McCaskey’s passing, releasing the following statement, per 670 The Score’s Chris Emma: “My heart is heavy as I think about Michael McCaskey and can’t believe he is no longer with us. His fierce love of the Bears was unmatched as was his intellectual capacity and thirst for knowledge on a myriad of subjects. Michael displayed a professorial presence that could be challenging, but was also inspiring. I will forever be grateful for the many opportunities for growth that he provided me, as well as for his trust and support. Michael always strived to do things the right way with high character and with the Bears best interests always paramount. Michael was a good man, gone much too soon. He presided over the only Super Bowl Championship Chicago Bears team in 1985, and I know he is still smiling about that magical season. God bless Michael and his family.”

Bears president Ted Phillips on the passing of Michael McCaskey: "Michael was a good man, gone much too soon. He presided over the only Super Bowl Championship Chicago Bears team in 1985, and I know he is still smiling about that magical season. God bless Michael and his family.” pic.twitter.com/09GUvmjllC 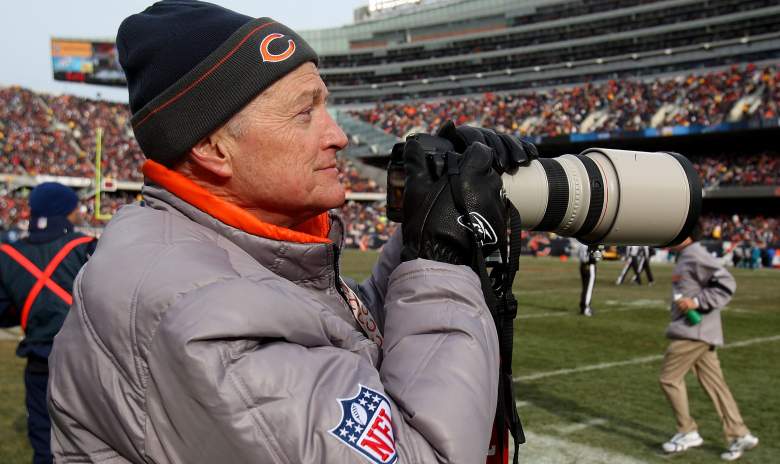 GettyMichael McCaskey, Chariman of the Board of the Chicago Bears, tries his hand at sideline photography during a game between the Bears and the Jacksonville Jaguars on December 7, 2008 at Soldier Field in Chicago, Illinois. The Bears defeated the Jaguars 23-10. (Photo by Jonathan Daniel/Getty Images)

McCaskey became the team’s chairman of the board in 1999 after he was replaced as president. He stepped down from that position in 2011.

During his tenure as president of the Bears, Chicago made the playoffs eight times, won six NFC Central titles and had one of the most menacing and dominant teams in NFL history in the 1985 Super Bowl XX Champions.

He was voted NFL Executive of the Year the year after, and his legacy will forever be entrenched in Chicago Bears history. The McCaskey family also released a statement following the announcement of his passing.

“Mike was already successful in every sense of the word when he took over for George S. Halas after the passing of ‘Papa Bear’ in 1983”, the McCaskey family said in their statement. “We are grateful to Mike for overseeing arguably the greatest team in NFL history, and for his many years of service to the Bears and to us. The oldest of eleven siblings has many duties thrust upon them, not all of them pleasant, yet Mike handled them all with grace and patience. Although Mike’s passing was not brought on by the novel coronavirus, our family, like so many people, is not able to gather and grieve together at this time.”

McCaskey is survived by his wife Nancy, along with his two children, John and Kathryn, and his grandson, Jackson.

READ NEXT: Bears Predicted to Be NFL’s Last Unbeaten Team, Have Wild Finish vs Packers