Baker Mayfield has been adamant that he’s “moving in silence” this offseason as he prepares for a crucial third season with the Cleveland Browns. However, that doesn’t mean the former No. 1 overall pick isn’t having some fun.

Mayfield was caught showing off some of his moves in a viral wedding dance video, published by TMZ. The long-haired, Heisman winner puts on a show at the wedding, where social distancing was put on the back-burner.

TMZ reported that Mayfield was attending his cousin’s wedding in Simpsonville, S.C. on May 25. That was shortly after he hosted a workout in Texas for his Browns teammates. Mayfield confirmed during a conference call with reporters last week that there were nine of his Cleveland teammates present for the get-together.

“It felt really good, I will be honest.” Mayfield said, per the Cleveland Browns official site. “It felt really good to get around them, to start speaking the terminology and for some of these guys to just to be around each other. I think that was a big thing for (TE Austin) Hooper to be down here and be around some of the guys. A lot of them were here last year, but it was good for everybody to be around, speaking the same terminology and just kind of hanging out during all this. You are kind of stuck at home, but we had a chance to get outside and throw a little bit.”

The Browns saw a change in regime this offseason after a disappointing 6-10 campaign that was filled with promise early on. Kevin Stefanski came in to take over from Freddie Kitchens for his first head coaching gig, and the Browns then hired general manager Andrew Berry to take the place of John Dorsey as general manager.

Berry promised the Browns would be aggressive to fill holes on the roster and they have done just that in free agency and the draft. Offensive tackle Jack Conklin and tight end Austin Hooper were big gets in free agency, while Jedrick Wills headlined a draft class that was widely praised as great. Mayfield has been a fan of the moves so far.

“Looking at the grand scheme of things of what we brought in throughout the draft, trading, free agency and all of that, it seems like they are absolutely one message, one team,” Mayfield said. “Personnel wise of what they have tried to do for the scheme and matching that up, they are on the same page, I will say that. For the whole team, we are bringing in guys that have the right mindset, that want to win and it seems as though they will do anything to have that accomplished.” 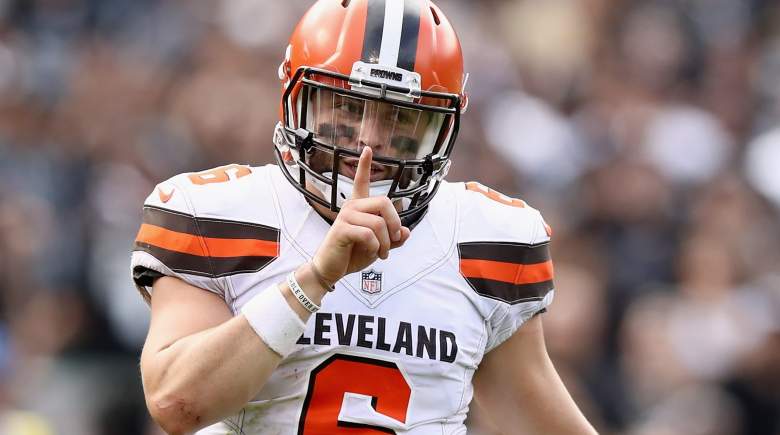 Last year did not go as planned for Mayfield, stumbling after a stellar rookie year. Mayfield finished the season with 3,827 yards, 22 touchdowns and 21 interceptions, ranking next-to-last in both passer rating (78.8) and completion percentage (59.4%). It was a far cry from his first year, when he set the rookie record for touchdown passes.

Baker Mayfield says it's time to shut up and play:

The Browns will face a decision this offseason to pick up Mayfield’s fifth-year option, so he understands a big year will go a long way in that. However, he said he’s not adding more pressure to himself.

“For me, it goes back to the mindset that I am comfortable and living in and that work-ethic mentality. I think that fits it. There is no doubt Year 3 is always a big year in these contracts,” Mayfield said. “Timing wise, everybody knows that. I am not going to put any added pressure on myself. There is no need for that because if I win, good things will happen and good things will happen for our team and the guys around me.”