In the afterglow of a very, very big Game 3 win in the NBA’s Eastern Conference finals against the Miami Heat, Celtics forward Jaylen Brown was asked to look back at what happened in the postgame locker room two days earlier, after Game 2. That was when Brown and teammate Marcus Smart had a verbal altercation that was witnessed by multiple reporters and touched off a couple of days in which much ink was spilled over team meetings, soul-baring sit-downs, and potential chemistry problems for Boston.

Brown poked a hole in all the media musings, though, by saying that the reaction to the incident far outpaced the significance of the incident itself.

On Saturday night after Boston built—and, finally, held onto—a 20-point lead on the Heat, Brown was asked what he could say about the locker-room tussle from the previous game:

That it was probably blown out of proportion. We are a lot of grown men, there is a lot of passion and emotion going on. At the end of the day, we’re family, we represent this organization, we represent each other and we won’t ever let anything come in between that. We’ve got a tremendous opportunity and nothing is going to stop us from trying to maximize that.

Jaylen Brown: Of 17 Shot Attempts, 14 in the Paint

Brown finished the game with 26 points, but it was the way in which he got those points that stood out—he almost entirely put aside the 3-point shot and focused on attacking the rim and scoring in the paint. Brown had been averaging 6.9 3-point attempts per game in the playoffs, but in Game 3, he took only two. He took 14 shots in the paint and also attempted one long 2-pointer. Final tally: 11-for-17 shooting, 10-for-14 in the paint. 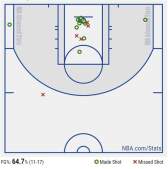 “Just have to get back to what I do best that’s what I came into the league doing,” Brown said. “Different matchups, different situations call for me to be able to have to be versatile and play different roles on this team, but what I do best is get to the basket. I just wanted to come out and be the best version of myself.”

That was especially impressive given the tense nature of the 48 hours heading into Game 3. Brown said it was overblown, but still, there were reported meetings with coach Brad Stevens and phone calls between players to clear the air.

ESPN Sources: Brad Stevens had a late night Thursday meeting with Celtics leaders – Kemba Walker, Jayson Tatum, Jaylen Brown and Marcus Smart – to work through emotions of post-Game 2 locker room. A lot of yelling in locker room, but nothing escalated to a physical confrontation.

After it all, Brown was not exactly well-rested.

“To be honest, I didn’t get much sleep, the last 48 hours,” Brown said. “I was so antsy to get back and play basketball. I didn’t think the last two games exemplified what this team is about. I couldn’t wait to come out a be the best version of myself and try to add to a win. I’m glad to be part of this team and this organization. I’m proud of how we responded.”

Stevens said he was eager to see just what that response would be. The Celtics could have come out flat and tense, racking up another loss and pushing themselves to the brink of elimination—which would have set the team into an offseason packed with questions. Or they could have bounced back with an aggressive effort that got them back into the fight for a spot in the NBA Finals.

“I was curious to see what would happen tonight, but I didn’t have much doubt,” Stevens said. “I think this group has some good character.”

Brown said that, though the emotions of Game 2 lingered, it was important to put that aside and get back to the task at hand. Miami is too good to play against when distracted.

“It’s just about honing in, focusing,” Brown said. “There’s some great guys in that locker room—a lot of emotions, a lot of passion. But we’re family and we’re here for each other at the end of the day. We exemplified that when we came out together, we stayed together through some tough moments. They made a big run at the end of the second quarter, Tyler Herro, made some big plays but we didn’t hang our heads, we kept our will high and persevered to win this game.”

Jayson Tatum, who scored 25 points to go with 14 rebounds and eight assists, agreed with Brown that what happened after Game 2—with two losses to open this series—was nothing unusual.

“It’s been normal,” Tatum said. “Anybody that plays sports, played a team game—we’re not supposed to be happy to be down 0-2. If you are, then you don’t care about this. Basketball is a game of emotion, you want guys to be frustrated, be upset, to care. It’s nothing personal.”

READ NEXT: Does Gordon Hayward Fit With Celtics? Kevin Garnett Has Strong Take