The Brooklyn Nets will be without the services of star point guard Kyrie Irving for the foreseeable future after the team said he isn’t allowed to participate until he’s vaccinated.

For most teams in the NBA, this would be a big deal, but the Nets are in a unique situation where they’re still loaded with enough talent to still compete for a title. A big reason for this is they still boast two of the best players in the league in Kevin Durant and James Harden.

Life without Kyrie will be difficult, but if their most recent preseason game is anything to go by, Harden will simply shift over to the point guard spot that he shined in as a member of the Houston Rockets and the team will be just fine.

However, a perfect world would have Irving in the starting lineup. When asked about Irving being gone from the team, Harden quickly reminded everyone that he’d welcome him back with open arms.

James Harden would love to have Kyrie Irving back, if possible: "Kyrie believes in his beliefs & he stands firm & strong on that. We respect it. We all love Ky. But as far as us, we have a job to do. Individually, myself, I’m still wanting to set myself up for a championship."

In the first time speaking to reporters after the decision, the Nets star let everyone know that he respects Kyrie’s decision, but the team has to put it all behind them.

“Kyrie believes in his beliefs and he stands firm and strong on that,” Harden said. “We respect it. We all love Ky. But as far as us, we have a job to do. Individually, myself, I’m still wanting to set myself up for a championship.”

Before the Nets laid down the hammer, the idea was that Irving would be joining teams for only road games, but they decided that was likely going to be too much of a distraction and they decided to be without his services entirely.

It’ll definitely be an adjustment for the team, and there’s still a chance that he could reverse his decision and join the Nets at a later date. The Nets have already said that would be an option, so it might just end up being a matter of time, especially when Irving starts missing out on those game checks.

Harden On The Way Out? 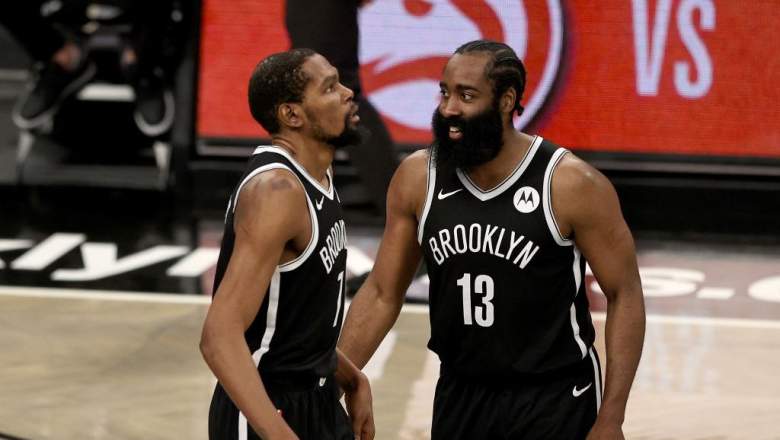 While most of the chatter has been surrounding Irving’s future with the team, there has been some focus on a different star.

ESPN’s Stephen A Smith says Daryl Morey has his eye on James Harden and could be looking to pry him away from the Nets amid this whole debacle. It seems highly unlikely the Nets would simply let him go, so this might just end up being a lot of smoke.

Harden is now more valuable than ever in the absence of Irving, so the Nets will more than likely want to hold onto their high-scoring guard. With Spencer Dinwiddie gone, there aren’t many players on the roster who can hold down the point guard spot, so Harden will need to provide for the team there.

We’ve seen him start there in the preseason, so that’ll likely be where he remains in the lineup until Irving makes a return.