The Buffalo Bills faced the Denver Broncos for their second preseason game on Saturday, August 20, and while numerous offensive starters took the field, including quarterback Josh Allen, one of his favorite targets was noticeably absent, tight end Dawson Knox.

Knox and his family are in mourning following the sudden death of his little brother, Luke Knox, at age 22. Knox was excused from practice on Thursday, and on Saturday afternoon, remained inactive in order to attend Luke’s funeral service.

Knox tweeted on Friday, “Thank you all for the outpouring of love and support for my family. Our hearts are broken but we know Luke is in a much better place now with his savior Jesus. We’ll celebrate his life at Christ Pres. Church tomorrow, visitation starting at 2pm and the service will start at 4pm.”

During the second half of the game, Allen was asked about Knox, and he sent a heartfelt message to his teammate. “We know the situation. Our hearts go out to him and his family. Condolences have obviously been sent. You hate to see your family and teammates hurting like that. You share the hurt,” Allen said.

“I know Bills Mafia has donated quite a bit of money already to the P.U.N.T. Foundation which is near and dear to Dawson’s heart… which again, is just another act of how sincere Bill Mafia cares about us.”

"Our hearts hurt with @dawson_knox and for him, and we'll be here for him."@JoshAllenQB | #BillsMafia pic.twitter.com/RRWEHp2cdt

As of Saturday, over $150,000 was raised for the P.U.N.T Pediatric Cancer Collaborative in honor of the Knox family, as Bills fans donated money in increments of $16, to honor Luke’s jersey number, or $16.88, for both brothers.

“But again, there’s not much you can say except to just be there them,” Allen continued, noting that he doesn’t have a timetable for Knox’s return. “Don’t know when he’s coming back. But ya know, my heart, and I can speak for all of our team, our heart hurts with him and for him and we’ll be there for him.” 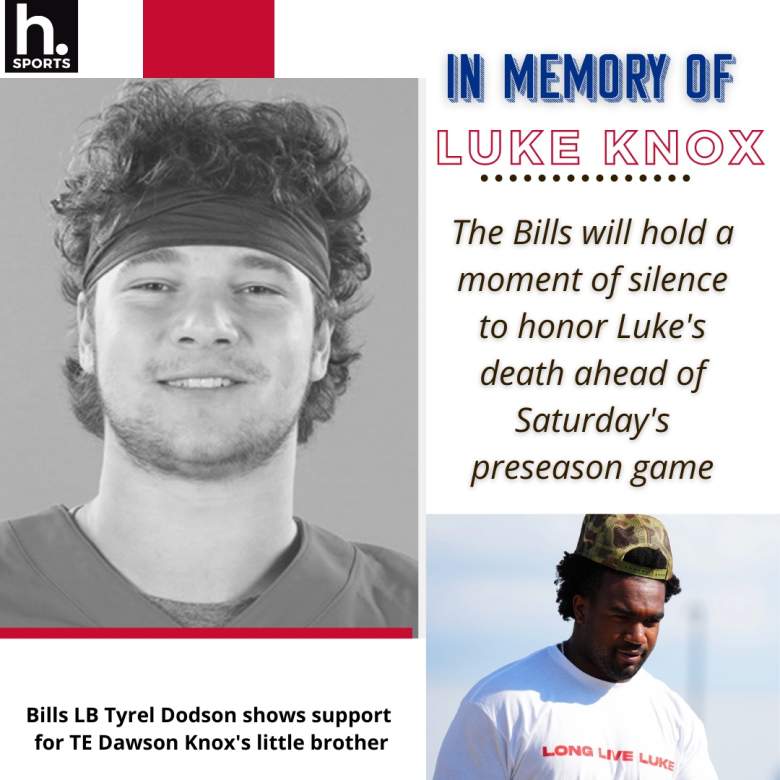 Before kickoff on Saturday, the Bills took a moment of silence in Orchard Park to honor Luke’s life. Linebacker Tyrel Dodson showed his support by showing up to Highmark Stadium wearing a shirt that read, “LONG LIVE LUKE.”

Luke appeared to be following in his big brother’s footsteps, starting out his college football career at Ole Miss in 2018. A business major, he earned an Athletic Director’s Honor Roll distinction in 2020 and played linebacker before switching to tight end in 2021, per Bleacher Report. Luke transferred to Florida International ahead of the 2022 college football season.

Originally from Brentwood, Tennessee, Luke, mostly played special teams during his time at Ole Miss, Knox’s alma mater, where he appeared in 23 games and recorded 11 tackles, one fumble recovered, and two passes deflected in four seasons.

Luke recently transferred to FIU where he was preparing for the season opener on September 1 against Bryant University.

Luke’s final Instagram post before his death was shared on July 5, where expressed how happy he was to be playing football FIU. He shared a series of photos from Miami and wrote, “Live in Miami andddd play some ball?! Yaa we’ll take that. Thank you Lord for blessing me. You always know what’s best! Month one down in Miami. (Pretty much fluent in Spanish now).”

Knox’s little brother was also his biggest fan. After Knox got drafted by the Bills in the third round of the 2019 NFL Draft, he wrote on Instagram, “One of the proudest moments in the life of a younger brother. So dang proud of you bro. Time to go get what’s yours!! Love you 🙏 #BILLSMAFIA.”

Allen Threw a Touchdown During His Only Drive Vs. Broncos

NFL analysts and fans expressed major apprehension for Allen to participate in Saturday’s preseason game, but the 26-year-old scored a touchdown on his first drive, and then safely returned to the bench without injury much to everyone’s relief.

During the first quarter against the Broncos, Allen was able to scramble and buy time in the pocket before connecting with receiver Gabe Davis with a 28-yard touchdown pass.